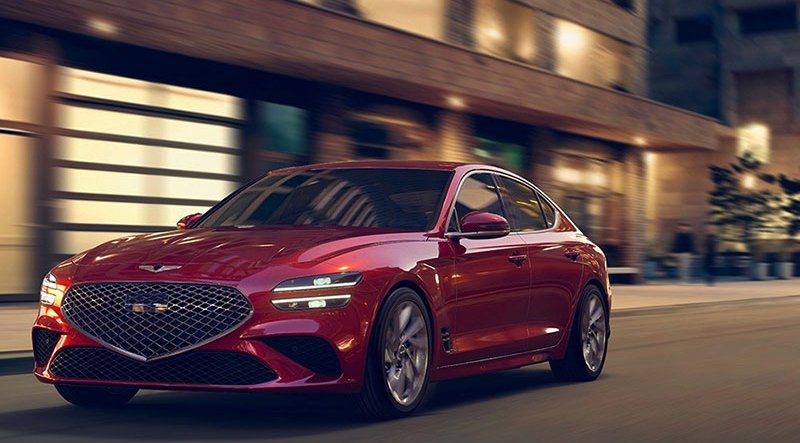 One sometimes wonders how manufacturers conjure up names for new models. It’s fairly obvious what Hyundai was thinking when it came up with the name Genesis for its luxury arm. The first book of the Old Testament, Genesis, starts with the words ‘In the beginning’, so a rather good name for a new marque.

Having been in America since 2015 Genesis is only now arriving on European shores with a five model range of two saloons, a shooting brake and two SUVs. Two all-electric models will arrive shortly. My test model, a G70 saloon, comes with the choice of two engines; a 2.2-litre diesel or a 2.0-litre petrol with two power outputs and three trim levels.

My G70 was the top trim Sportline model and with the 2.2-litre diesel priced at €48,035/£40,030. Those admiring the G70, and there were many, thought it strikingly smart and, subjective though looks are, it’s hard to disagree. The good news continues inside too with a very premium feel and touches like perforated and fluted upholstery show there’s more than a degree of thought gone into the detail.

A welcome array of proper buttons, possibly because the G70 is an updated version of the car that won the 2019 North American Car of the Year, means it lacks the overdone digitalisation of so many new cars.

On the road the G70 feels and drives like it looks, premium luxury. It’s no sports machine but picks up its feet when required and can be fast paced on cross country routes. The automatic transmission changes are seamless, with paddle assisted changes for added involvement. There’s the usual too interventionist lane keeping ‘safety’ kit, that involves far too many actions to stop it being meddlesome, which to be fair applies with most manufacturers.

The G70 may not rewrite the automotive rule book but it’s got style, presence and enough creature comforts for continent crossing relaxation.