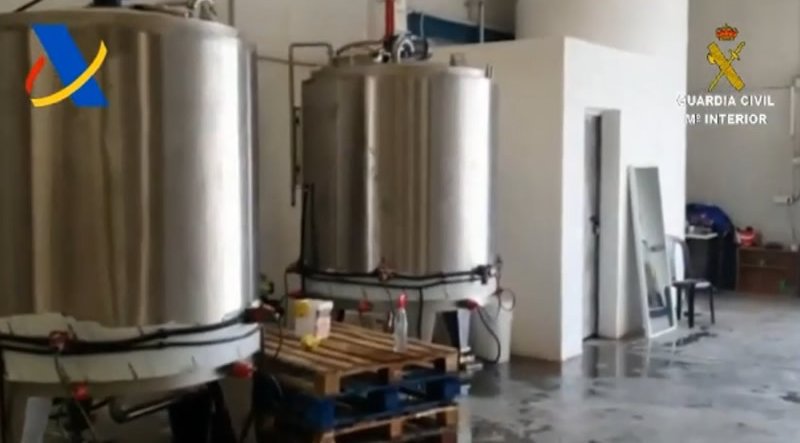 An investigation by the Guardia Civil and the Customs Surveillance, has resulted in the dismantling of the largest-ever illegal tobacco factory to be discovered in Spain. Specifically, it was dedicated to distributing tobacco for hookahs.

‘Operation Reveno-Glycerin’ saw three individuals arrested, with another three placed under investigation for the alleged distribution of shisha tobacco, both nationally and internationally.

As reported by the Tax Agency, the group had a potential capacity to produce 250 kilos of product a day, and the researchers estimate that in the last year they could have sold more than 65,000 kilos. It is in high demand in northern Europe, and the market value of its sales could well exceed €3million.

The detainees are charged with the crimes of tobacco smuggling, against industrial property, against workers’ rights, against public health, belonging to a criminal group, and money laundering.

Investigations began in the middle of last year, as a result of a shipment of this product to France from somewhere in Velez-Malaga. After numerous checks, the investigators were able to identify the facility from which the shipment originated and determine that there was a careful production chain distributed in four warehouses.

In one facility they received the shipments of tobacco that they hid with other materials such as clothing or sports shoes. Another one, very close to the first, was the factory in which there was not a large number of tobacco products. The third was the supplier of raw materials, and had a video surveillance system.

Finally, in the fourth warehouse, officers dismantled the logistics centre, which served as a facility for both strip tobacco (chopped and treated leaf), and for semi-finished products, packaging and cardboard, preparing the finished product for sale.

Surveillance over those involved made it possible to intercept one of the shipments, an action that triggered four searches in the industrial buildings and warehouses in Velez-Malaga. Two of the detainees were of Jordanian nationality, and the other one, Egyptian.

By raiding these warehouses, the police were able to prove the ‘ economic footprint’ of the illicit activity, and dismantle the framework with which the group operated.

During the operation, officers confiscated the factory’s crusher, grinder, and vats. Also seized were 2,432 kilos of ‘strips’, 6,000 kilos of tobacco for ‘hookah’ of different brands and flavours, various materials used for the packaging and storage of tobacco, more than 51,000 labels for different products and brands in different languages, a van. and three high-end vehicles, as reported by laopiniondemalaga.es.