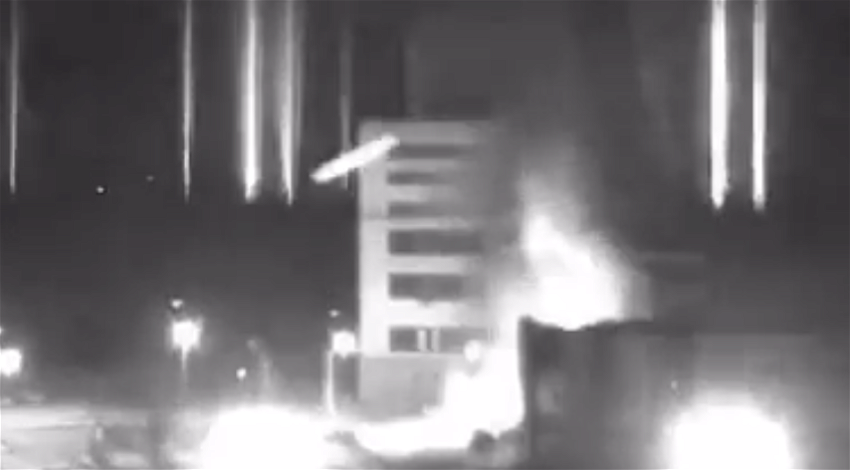 No change in radiation levels at Zaporizhzhia despite new "Chernobyl" claims from Ukraine President Zelensky.

No change in radiation levels at Zaporizhzhia despite new “Chernobyl” claims from Ukraine President Zelensky.

IT appears that there has been no change in radiation levels at Zaporizhzhia, Europe’s largest nuclear plant in Enerhodar after fighting between Russian and Ukrainian troops caused a fire – despite claims from Ukraine President Volodymyr Zelensky and his government that Europe could suffer a new “Chernobyl”.

In the early hours of March 4, Dmytro Kuleba, Ukraine’s Minister of Foreign Affairs, begged Russian forces to stop the bombardment on Zaporizhzhia: “Russian army is firing from all sides upon Zaporizhzhia NPP, the largest nuclear power plant in Europe. Fire has already broken out. If it blows up, it will be 10 times larger than Chernobyl!”

And a Ukrainian official told the Associated Press that elevated radiation levels had been detected around the nuclear power plant and that Ukraine’s Prime Minister was calling on NATO to “close the skies” over nuclear power plants: “It is a question of the security of the whole world!”

A statement from Ukraine President Volodymyr Zelensky read: “Europe needs to wake up. The biggest nuclear power plant in Europe is on fire right now. Russian tanks are shooting at the nuclear blocks. These are tanks equipped with thermal imagers, so they know what they are shooting at. They have prepared for it,” he said.

“I am addressing all Ukrainians, all Europeans and everyone who knows the word Chernobyl, who knows many casualties were inflicted by the explosion on the nuclear plant. This was a global catastrophe and its consequences were battled by hundreds of thousands of people. Tens of thousands had to be evacuated and Russia wants to repeat that and is already repeating it, but 6 times bigger.”

Footage of direct fire at a building at the Zaporizhzhia Nuclear Power Plant last night. Russian forces say the plant is under their control.pic.twitter.com/hDNfNDZp54

He continued: “Europeans, wake up please. Tell your politicians, Russian forces are shooting at the nuclear plant in Ukraine. Zaporizka nuclear plant city of Energodar. There are six energy blocks there. Six. In Chernobyl, one energy block had exploded. We have gotten in touch with our leaders, partners, I have already spoken to Charles Michel, Olaf Scholz, Andrzej Duda, President Biden. We have contacted head of IAEA, Grossi and also Prime Minister Johnson.

“We are issuing a warning, no country has ever shot at nuclear blocks except for Russia. First time ever. For the first time ever in our history, in the history of human kind, the terrorist country has reverted to nuclear terror. Russian propaganda had warned in the past to cover the world in nuclear ash. Now this isn’t just a warning, this is real. We don’t know for sure what the results of this fire will be, we don’t know when the explosion will happen or, God willing, not going to happen. Nobody can know or calculate for certain, but our boys have always kept the nuclear plant safe.

“We made sure no provocations could happen. We made sure no one could go there or access it. We made sure no one could plant bombs there. Plant bombs and keep the world hostage to nuclear catastrophe. We must stop Russian soldiers now. Immediately call your politicians. Ukraine is 15 nuclear blocks, if there is an explosion it is the end for everyone. End to Europe. Its the evacuation of entire Europe. Only immediate action can stop the Russian troops. Do not let Europe die in the nuclear catastrophe,” he concluded.

However, a tweet from the International Atomic Energy Agency (IAEA) confirmed that radiation increases had not been registered: “Ukraine regulator tells IAEA there has been no change reported in radiation levels at the Zaporizhzhia Nuclear Power Plant site.”

The New York Post reports that Ukraine’s state emergency service said on Friday, March 4 that the fire has been put out near the Zaporizhzhia nuclear power plant.