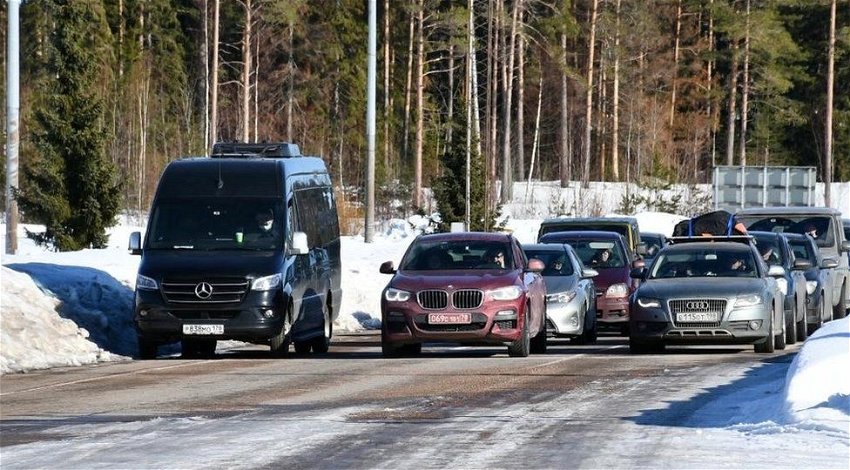 The war in Ukraine has not gone as well as expected for Putin with increasing opposition locally, a situation that many  Russians fear will result in martial law being imposed. That fear and the persistent rumours has resulted in a steady flow of Russians leaving the country.

According to a report by the BBC there is a steady flow of traffic at the border with Norway, the lack of flights meaning the only way people can leave is by car or train.

Many young Russians already hold visas and are making good use of those to depart the country, many citing despair at the situation in Ukraine and voicing their strong opposition to the invasion.

One such woman told theBBC: “People in Ukraine are our people – our family. We shouldn’t be killing them.”

When asked if she would be going back, she replied: “Not while our dreadful government is there. It is so, so sad.”

According to the woman most Russians don’t want this war, but they risk going to jail if they try to stand up to Putin.

Finland tends towards neutrality and the Finnish people are welcoming, showing enormous empathy for their plight as the do the Ukrainians. However that view is changing with latest opinion polls, a growing majority believing that it’s time for their country to join NATO and access the protection that membership of the alliance would bring.

The situation at the border crossing is the same on the trains with each one leaving fully booked. Ticket prices are increasing rapidly making it more difficult with the banks having imposed limitations on withdrawals as they fear a run following the banking sanctions imposed by the West.

The value of the rouble has collapsed and the economy is under treat striking more fear into the hearts of those who despise what their government is doing.

Many Russians fear a return to the Russia of old and are making good of the opportunity to leave. The increasing opposition from “big business” and the public to the war driving the fear of martial law as Putin moves to control the situation.

Martial law would give Putin the freedom do whatever he needs to cling on to power and to continue with the war effort. It is clear from what he has said publicly and in private to French President Emmanuel Macron that he has no intentions to withdraw from the Ukraine until he fully occupies and controls the country.

The indiscriminate bombing by Russian forces suggest that Putin will do whatever he needs to do to achieve his aim, and that according to a French aid who listened in on the call could mean use of the nuclear option.

Such a prospect is frightening for the average Russian as it is for Europeans, leaving many to fear what Putin might do and whether he will look to impose martial law to achieve a goal they do not share with him.