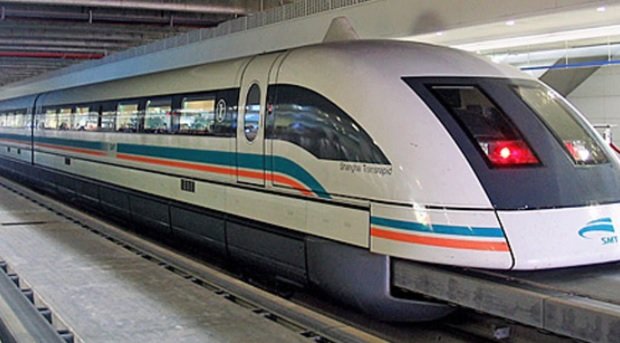 China has been working on high-speed Maglev train technology for some years, with the latest prototype expected to reach a top speed in excess of 620kph (380mph).

Unveiled in China in Chengdu, Sichuan Province, the sleek 21 metre long (69 feet) prototype runs on high-temperature superconducting (HTS) power that makes it look as if the train is floating along the magnetised tracks.

Professor He Chuan, vice president of Southwest Jiaotong University, which worked on the prototype, told reporters that the train could be “operational” within 3 to 10 years.

He said: “Sichuan has rich and rare earth resources, which is very beneficial to our construction of permanent magnet tracks, thus promoting the faster development of experiments.”

China is already home to the fastest commercially operating train, the Shanghai Maglev, with the first train of its type being put into use in 2003 linking Shanghai Pudong Airport and Longyang Road in east Shanghai with a top speed of 431kph.

The country is also home to the world’s largest high-speed rail network, stretching over 37,000 kilometres, with the first high-speed Maglev train being put into operation in 2021. A new 174 kilometre high-speed railway line connecting Beijing with 2022 Winter Olympics host city Zhangjiakou reduced travel time between the two locations from three hours to 47 minutes.

The high-speed train that is expected to reach 620 kph is not the only new development from the country, with a bullet train specifically designed to withstand freezing temperatures unveiled earlier this year. The CR400AF-G train, which can travel up to 350 kph in weather as cold as minus 40 degrees Celsius, will run on routes between Beijing, Shenyang and Harbin.

Originally from South Africa, Peter is based on the Costa Blanca and is a web reporter for the Euro Weekly News covering international and Spanish national news. Got a news story you want to share? Then get in touch at editoria[email protected]