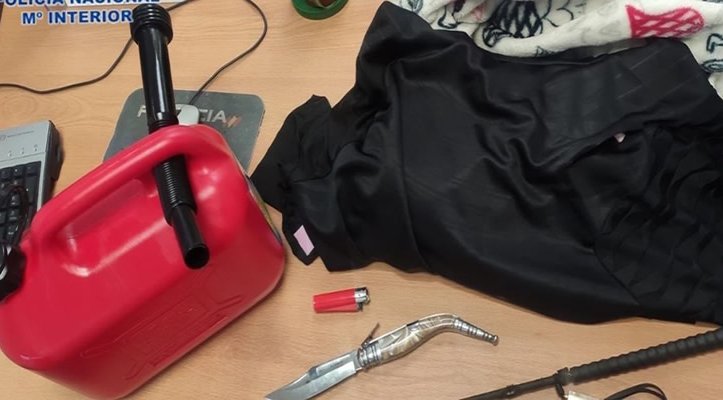 Alicante man arrested after dousing his wife and son in petrol to set fire to them. image: policia nacional

National Police officers have arrested a man in the Alicante municipality of Elda after he allegedly poured petrol over his wife and son and threatened to set them on fire.

According to a police report, he had already beaten his wife with a horse riding crop, and pulled a knife on his son when he tried to intervene and protect his mother. The detainee has been charged with causing serious injury, mistreatment in the family, and attempted murder.

An emergency call alerted the police, who immediately responded to the location, reportedly having to force their way into the property on arrival. Once inside, the officers observed how the man was in a state of agitation, stained with blood, and hiding a lighter in his pocket.

The couple’s son had a contusive wound bleeding from his back, and the man’s wife showed symptoms of having been assaulted. It was apparent that they had both been doused with petrol over their bodies, presumably with the intention of setting them both on fire, according to the police.

After verifying the facts, and taking statements from the mother and son, the alleged perpetrator was arrested, and the injured woman and son were given assistance, along with another of the daughters who witnessed the incident.

Both required medical attention, and were transferred to a hospital. As highlighted by the National Police, thanks to the rapid intervention of their officers, the injured are under observation, and out of danger.

The UFAM group from Elda National Police Station has taken charge of the investigation to clarify everything that happened, in order to inform the judicial authority, as reported by laopiniondemalaga.es.