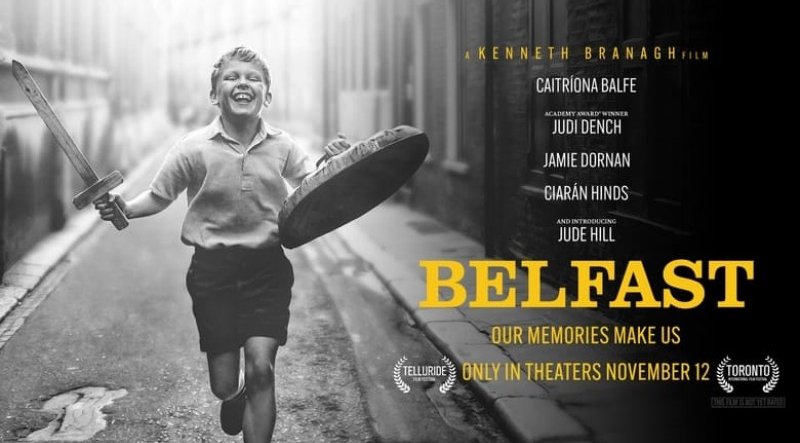 Belfast is a deeply personal look at a family during the Troubles in Ireland, from writer-director Kenneth Branagh, based on his own experiences.

Belfast, directed, written and produced by the legendary Kenneth Branagh, is a personal look at his experiences of being a young child during the late 1960s Troubles in Ireland. This film has an impressive 87 per cent critic rating and 92 per cent audience rating on Rotten Tomatoes and is definitely worth a watch.

Despite its subject matter, Belfast is an uplifting and humourous film starring some acting greats including Dame Judi Dench (James Bond), Ciaran Hinds (Harry Potter), Jamie Dornan (50 Shades of Grey) and Caitriona Balfe (Money Monster). Belfast is a black and white coming of age movie set against a bouncy Van Morrison soundtrack, focussing on a tight-knit family in which Hinds and Dench play the grandparents superbly, adding more humour and a feeling of comfort.

Buddy and his family are Protestant, watching the attacks on the Catholic people living on their street – people they think of as their friends and neighbours. The movie doesn’t go into too much context around the Troubles, something that Buddy’s family feels somewhat separate from and something they don’t want to get involved in – no matter how hard people try and recruit Buddy’s father to their Protestant vigilante groups.

I really enjoyed this movie, it’s a nostalgic feel-good film despite the backdrop of the Troubles, as we watch Buddy form a crush on a Catholic girl at school, the funny conversations he has with family members and the growing tension in religion – all tied up with the famous Irish humour.