One arrested and 300 kilos of marijuana seized in Mijas warehouses 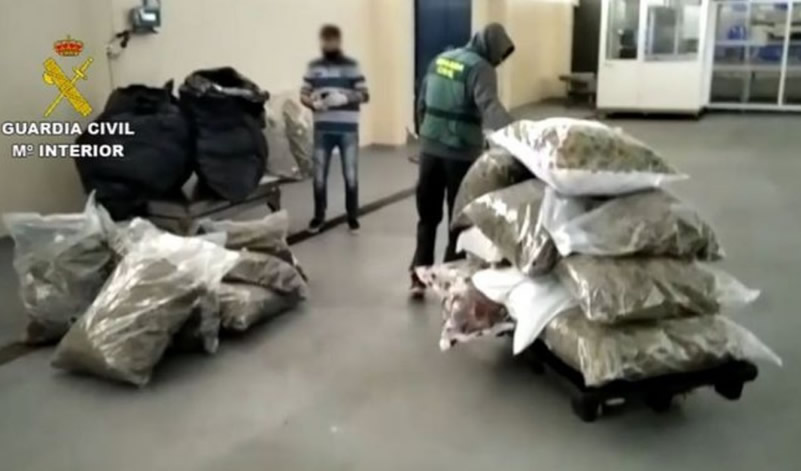 One arrested and 300 kilos of marijuana seized in Mijas warehouses. image: guardia civil

More than 300 kilos of marijuana seized by Guardia Civil in Mijas warehouses, with one person arrested

Guardia Civil officers from the main Mijas barracks have arrested one person and placed three others under investigation for their alleged involvement with an organisation dedicated to drug trafficking, after the discovery of more than 300 kilos of marijuana buds.

These were found in several storage facilities in a local urbanisation in the Malaga municipality where suspicious movements by individuals detected around these warehouses had placed the police on alert, and they subsequently launched an investigation.

They visited one of the facilities that had been left open and instantly verified the strong smell of marijuana being given off. Inside the warehouse they found a torn vacuum-packed bag containing 6.4 kilograms of marijuana buds.

Further investigations revealed that the premises belonged to a developer with a single administrator, who was in bankruptcy proceedings. This was a situation that the criminal group took advantage of to cover its illicit activities, making it much more difficult to locate its authors if narcotic substances were found inside.

The administrator asserted his ownership to carry out rental contracts for the properties, knowing that they were already seized, which is why he is being investigated.

Following the first arrest, officers carried out a search for the detection of drugs in the rest of the storage facilities of the urbanisation, with the support of the Guardia Civil’s Cynological Service. This resulted in the discovery of a second storage room housing 304 kilograms of vacuum-packed marijuana buds.

Finally, the police proceeded to arrest the person who kept the drugs in the storage rooms, while two people linked to him are also being investigated. All those involved are attributed the crimes of drug trafficking, and belonging to a criminal organisation, depending on the case. In total, 311 kilos of buds were confiscated, as reported by laopiniondemalaga.es.