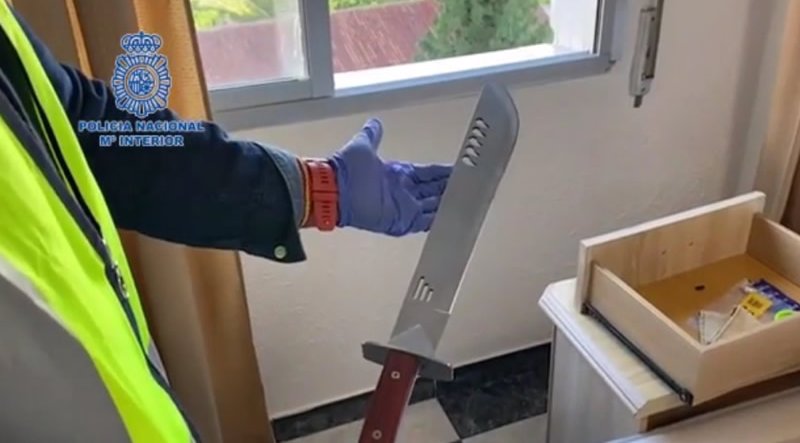 National Police arrest a veteran bank robber in Malaga suspected of carrying out a €130,000 heist

The National Police has arrested a well-known veteran robber in Malaga for his alleged participation in the robbery of a bank in the Ciudad Jardin neighbourhood. The 67-year-old criminal has a history of more than twenty arrests, most for robberies with violence.

He is suspected of being behind the robbery of €130,000 from a bank in the capital, during which the employees were intimidated with a gun. Along with the main investigated, the police have arrested his sentimental partner, and her sister, aged 50 and 57 respectively, who are believed to have offered him support with surveillance functions in the vicinity of the establishment.

After the bank robbery, ‘Operation Escarlata’ was launched, which has resulted, to date, in three arrests and, in addition, the intervention of a compressed air revolver, several bladed weapons – including a large machete – about €1,000 euros in cash, and various items of clothing that would incriminate the suspects with the criminal act.

The bank robbery occurred early in the morning, around 8:30am, when two hooded men sneaked into the office, taking advantage of the departure of a cleaning lady.

One of the assailants went to the employees and pointed a gun directly at them. Meanwhile, the second assailant stole the money from the office, about €130,000. CIMACC 091 immediately received the robbery signal from the bank, which activated the protocol in these cases.

An ocular inspection was conducted following the heist, to collect traces of evidence, during which the investigators also collected information on the alleged perpetrators. One of the employees pointed out that one of the robbers had a funny way of walking.

This immediately triggered the investigators to identify their suspect, who they knew to have a particular action while walking. This robber also had a certain predilection when choosing the target for branches of a certain entity.

Finally, the police arrested their main suspect, as well as his partner, and a sister, all for their alleged involvement in the incidents. Efforts to fully clarify the facts continue, as reported by laopiniondemalaga.es.