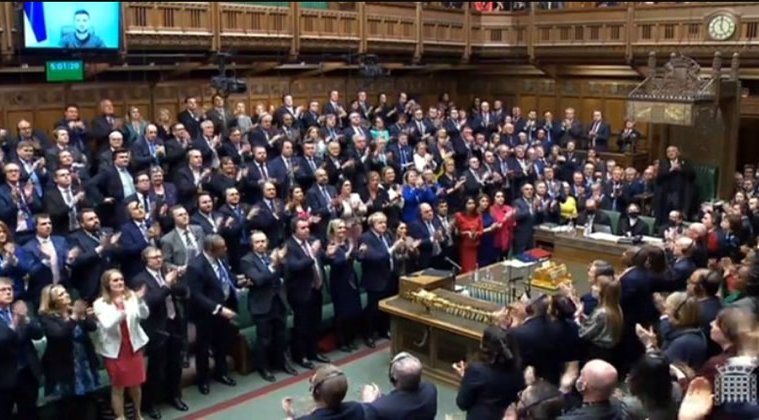 Ukrainian President Volodymyr Zelenskyy made a stirring virtual address to a packed House of Commons this evening, Tuesday, March 8. At the end of his speech, he received a rare standing ovation from all those gathered, led by Prime Minister, Boris Johnson.

Mr Zelenskyy told how the conflict that has flared after Russia’s invasion of his country has already resulted in the deaths of more than 50 children. ‘These are the children that could have lived, but these people have taken them away from us”, he said.

A comparison of the current struggle was drawn by the President towards Britain’s Second World War fight with Nazi Germany. British people in the 1940s ‘didn’t want to lose your country when Nazis started to fight your country”, said Mr Zelenskyy.

He even went so far as to echo shades of the famous June 4, 1940 wartime speech made by Winston Churchill, when he insisted that his people will fight the Russian invaders to the very end. “We will not give up, and we will not lose. We will fight to the end, at sea, in the air, we will continue fighting for our land, whatever the cost”.

The President told the assembled MPs, “we do not want to lose what we have, what is ours”, stressing that his country is embroiled in a “war that we didn’t start and we didn’t want”.

Earlier in the day, Boris Johnson had labelled Vladimir Putin’s invasion of Ukraine as a ‘catastrophic venture’, during his meeting with the leaders of the Czech Republic, Slovakia, Hungary, and Poland – the Visegrad group of countries.

A campaign is gathering impetus, backed by London Mayor Sadiq Khan, which could force the Russian Embassy to change its address to Zelenskyy Avenue. There is also a petition urging Kensington council to rename Kensington Palace Gardens in honour of the Ukrainian president, as reported by dailymail.co.uk.