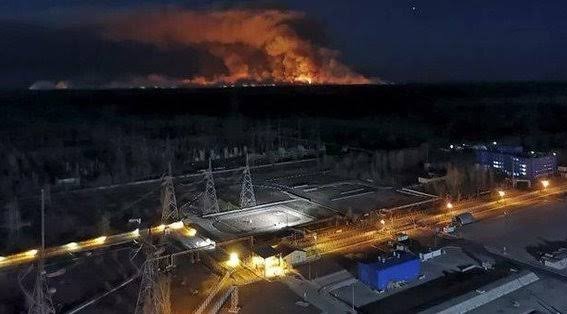 The Chernobyl nuclear power plant is believed to be without power, according to Ukraine’s nuclear operator.

BREAKING NEWS – The Chernobyl nuclear power plant in Ukraine is said to be without power, according to Ukraine’s nuclear energy operator Ukrenergo.

A report from the nuclear operator on Wednesday, March 9, said that due to a high-voltage line in Kyiv being disconnected due to the damage caused by Russian forces, the Chernobyl station and all nuclear facilities in the Exclusion Zone are without electricity.

A statement from the operator said: “Because of fighting and military actions of Russian troops, the nuclear power plant in Chernobyl has been fully disconnected from the power grid.

“Fighting actions are ongoing, which is currently making it impossible to repair and restore energy. The city of Slavutich is also disrupted.”

This loss of power could potentially be preventing the constant cooling of spent nuclear fuel, which is required to stop the temperature in the holding pools from increasing.

According to Ukrenergo, around 20,000 spent fuel assemblies are stored in the spent nuclear fuel storage facility-1.

If the temperature in the holding pools increases then evaporation will occur, which could lead to nuclear discharge.

Fears that if this were to happen, winds could transfer the radioactive cloud to other regions of Ukraine, Belarus, Russia and Europe.

In addition, there is no ventilation inside the facility and all personnel inside will receive a dangerous dose of radiation, according to the Daily Mail. Since Russian forces captured the facility, they have been keeping 210 scientists captive, who are reportedly being used to operate vital safety mechanisms.

Chernobyl Nuclear Power Plant was the scene of one of the worst nuclear disasters in history, which occurred on April 26, 1986. However, the site has been opened to the public since 2011 for day trips, although the land is not expected to be habitable for another 20 thousand years.

On Tuesday, March 8, experts from the International Atomic Energy Agency (IAEA), the international nuclear watchdog, voiced their concerns about the situation at Chernobyl, stating that they had lost all communications with the radiation safety system after remote systems went dark.

“Remote data transmission from safeguards monitoring systems installed at the Chernobyl NPP has been lost,” said a spokesperson for the IAEA.