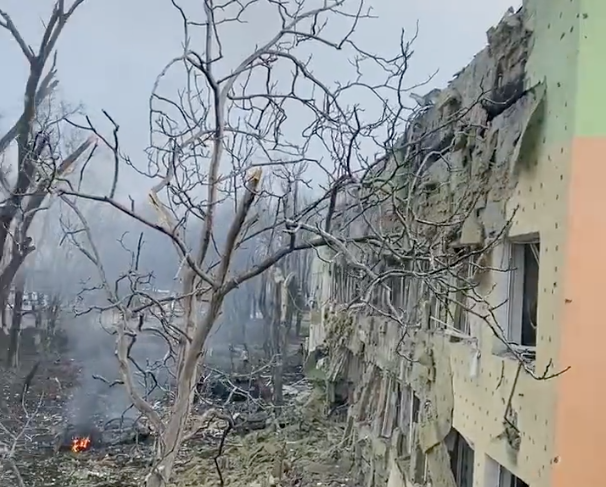 President Zelenskyy has confirmed that a children’s hospital was hit by Russian forces while many have been left wounded in Mariupol.

UKRAINE President Volodymyr Zelenskyy has confirmed that a children’s hospital in the Ukrainian city of Mariupol was hit by an airstrike from Russian forces on Wednesday, March 9, which has left at least 17 wounded in the under-siege city.

A tweet from the actor-turned-politician condemned the attacks and questioned how the world can sit by and let these things continue in his country.

“Direct strike of Russian troops at the maternity hospital [in Mariupol]. People, children are under the wreckage. Atrocity! How much longer will the world be an accomplice ignoring terror? Close the sky right now! Stop the killings! You have power but you seem to be losing humanity,” the president wrote alongside a video of the tragic scenes.

“The Russian occupying forces have dropped several bombs on the children’s hospital. The destruction is colossal,” Mariupol’s city council said.

Sky News is reporting that 17 people were wounded in the Mariupol hospital airstrike and according to the regional governor of Mariupol, women in labour were among those injured in the devastating airstrike.

Donetsk Oblast Governor Pavlo Kyrylenko said the attack came during a new cease-fire agreed by Russia on March 9 and as a result, no civilians were again able to flee the city due to ongoing Russian shelling.

Kyrylenko said the ceasefire was due to hold until 9 pm (local time) on March 9.

“We have a short window of time at the moment,’’ said Yevhen Nyshchuk, a member of Ukraine’s territorial defence forces. “Even if there is a ceasefire right now, there is a high risk of shells falling at any moment,” speaking on the morning of March 9.

The southern port of Mariupol, which is home to an estimated 430,000 people, has been under constant attack from Russian forces for days and another humanitarian corridor was set up on Tuesday, March 8 for around half of the city’s population to evacuate.

However, Russia again broke the agreed-upon ceasefire and began shelling the humanitarian corridor, according to a statement from Ukraine’s foreign ministry on March 8.

“Russian forces are now shelling the humanitarian corridor from Zaporizhzhia to Mariupol. 8 trucks + 30 buses ready to deliver humanitarian aid to Mariupol and to evac civilians to Zaporizhzhia. Pressure on Russia MUST step up to make it uphold its commitments,” the statement read.