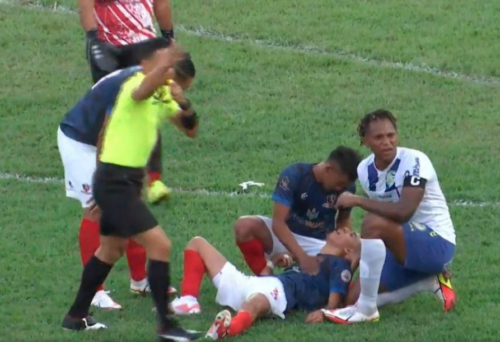 DURING a football league game in Honduras, a young footballer suffered a mid-game collapse in harrowing scenes shared on social media. Worryingly, the video and images will remind fans of when Al Wakrah’s player Ousmane Coulibaly suffered a heart attack during a league in Qatar back in January.

26-year-old Percy Castro, playing for Cantarranas side Club Deportivo Arsenal SAO, collapsed during the middle of the game against Juticalpa FC on Sunday, February 20. The video of the distressing incident is now being shared on Twitter.

Percy collapsed in the 42nd minute of a Honduran Liga game at the Juan Ramón Brevé stadium. The player was then stretchered off the field and taken to a nearby hospital, as reported by Diez.

Video footage shows the player unresponsive as his teammates gather around him and try to pick him up. Castro’s body is limp and one of the players tries to rub his heart while another summons for medical staff to enter the pitch.

Teammates frantically rub on the player’s chest while the almost lifeless figure of the young player flops back to the ground as medical assistance arrives.

Despite medical staff performing weak-looking chest compressions, a sign that Castro was potentially having problems with his heart, medical staff of the Cantarranas club issued an update the following day ruling out a cardiac arrest.

“Our player Percy Castro suffered an obstruction in his respiratory tract after receiving an unfortunate blow from an opponent. The player was taken to the Trochez Moltavan Hospital and Clinic, where he underwent the corresponding examinations,” read a statement on Monday, February 21.

It added: “Ruling out any respiratory arrest. We thank God and the prompt assistance of the medical team, the player is already at home under the observation of our medical staff.”

“We trust in your speedy recovery Percy Castro #3. You will come back stronger than ever!” the statement concluded.

Another young athlete collapses in the middle of the game. pic.twitter.com/J5kVu1BQ0H

Castro’s collapse is eerily similar to that of former Panathinaikos star and Mali international Ousmane Coulibaly, who suffered a heart attack during a league game in Qatar on January 8.

The 32-year-old player, who spent 12 years playing in Europe, collapsed in the goal during his side’s game against Al Rayyan in the QNB Stars League.

A league statement at the time confirmed the 16-cap international had suffered a heart attack.

The statement read: “During the QNB Stars League match between Al Rayyan and Al Wakrah on Saturday, Ousmane Coulibaly suffered a heart attack which required the intervention of medical and ambulance staff present at the venue.

“It may be noted that the player is currently receiving necessary medical care and attention.

“The Qatar Stars League wishes the player a fast recovery, and we would like to thank the medical staff of both teams, paramedics and doctors for their great efforts during such events.”

The referee spotted the 18-year-old São Bento midfielder clutching his chest before collapsing to the ground in the 17th minute.

He was quickly removed from the Baetão stadium in São Bernardo do Campo and taken to hospital.