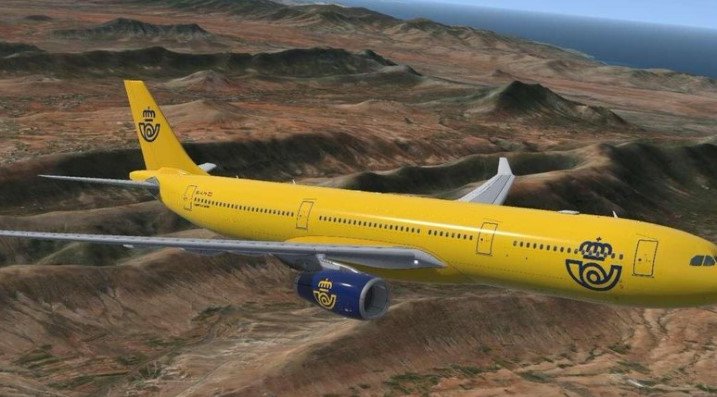 The Correos Cargo Airbus A330 “Milana Bonita” lifted off once again today, Thursday, March 10, headed for the Rzeszow-Jasionka airport, on the Polish-Ukrainian border. It was loaded with kitchen materials destined for the NGO World Central Kitchen of Spanish chef Jose Andres, to help feed Ukrainians who have been fleeing the conflict in their country.

Belonging to Iberojet, the air division of Avoris Corporacion Empresarial, the plane took off from Madrid airport. Manning the aircraft was the company’s own crew, who, in solidarity, offer to carry out the trips in their spare time.

Volunteers from the Post Office were in charge of transporting the kitchen material to the airport. It was subsequently loaded onto the plane to guarantee distribution at its destination – by the World Central Kitchen – of hot food, at various points near the border for the Ukrainian population.

Correos Cargo is the new parcel and merchandise air transport service, created to strengthen, and be a benchmark for, the Latin America-Europe-Asia logistics hub. This was the second such trip it had organised, together with Avoris, of the transfer of merchandise to alleviate this serious humanitarian crisis in which the citizens of Ukraine are immersed.

The collaboration of volunteer staff from both companies shows the commitment of the companies to those affected. This new service, which will be operational very soon, will respond to the increase in parcels being experienced thanks to the rise of electronic commerce, as reported by 20minutos.es.

Hello from Krakow! Another @WCKitchen cargo plane just landed with supplies for Ukraine…Thanks to @Correos for lending it! This will go to WCK team on Poland border & also to Lviv plus other cities in Ukraine to help our partners—Will report more from Lviv soon! #ChefsForUkraine pic.twitter.com/peKaz5RAqE