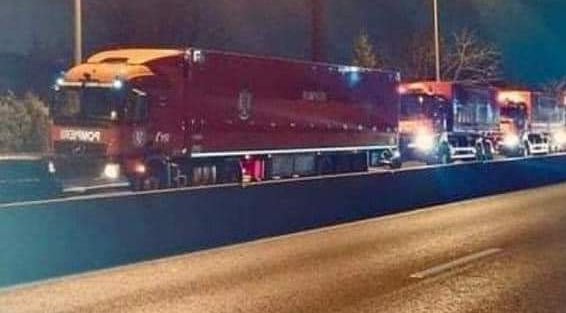 A SPANISH charity will send a humanitarian convoy to Ukraine to rescue mothers and children.

The Madrina Foundation will send a humanitarian convoy, which is due to leave on Friday, March 11, to rescue 250 Ukrainian children and mothers who have been victims of the war, according to a statement from the charity, which is based in Madrid.

The convoy, made up of eight vehicles, five coaches, two vans and a heavy-duty truck, will travel to the families, who are located at different points in Poland and Ukraine.

The humanitarian aid, in collaboration with Convoy Esperanza, will transport around 40 pallets of infant clothing, baby formula, warm blankets and baby sleeping bags.

According to the statement, the Foundation has already contacted women and mothers in Kyiv and Irpin, who are begging to be taken in. Only if the families are large, with more than 4 children, will the convoy allow the father in, the statement reads.

“Shelling alarms sound up to 12 times a day. Schools, hospitals and houses are bombed. There is no safe place. Only families with an elderly or disabled family member or a child turning 18 are left behind, ready for war,” the charity said.

“The Foundation’s goal is to rescue as many victims and vulnerable people as possible, especially pregnant mothers and children.”

It continues: “Pregnant mothers give birth in the basements of hospitals and are unable to leave because of continuous bombing alarms. These mothers who give birth have their breasts cut off, so they need a lot of “formula milk”, nappies and warm clothes.

“The destination at the Ukrainian-Polish border will be Medyka, although the convoy’s intention is to reach the city of Lviv in Ukraine, 70km from the border.

“The journey will take three days each way. The refugee families will have several temporary destinations in Madrid set up by the Community and the government.

“Subsequently, the Madrina Foundation will relocate the families between its reception flats, homes that take in mothers and children, as well as in villages in empty parts of Spain.”

The charity calls for unity in the face of adversity.

“We ask all families in Spain and Portugal to open up generously to accommodate mothers and children, and also all the people of Spain to welcome all the families who wish to start a second chance on Spanish soil.”

The charity also calls into question the refugee centres set up in Spain to accommodate those fleeing the war-torn country of Ukraine.

“The Spanish government says we can only take in only 6,000 refugees between the 3 centres in Madrid, Barcelona and Alicante, however, we believe for that up to 100,000 refugees could be taken into Spain – 10 per cent of those currently displaced by the war.

“If they are distributed in the empty parts of Spain and the government invests in transport, energy, health and rural university education, in order to fix the rural population, there is an opportunity for Spain to solve two problems – those displaced by the war and rural depopulation – with a single solution,” the statement concluded.