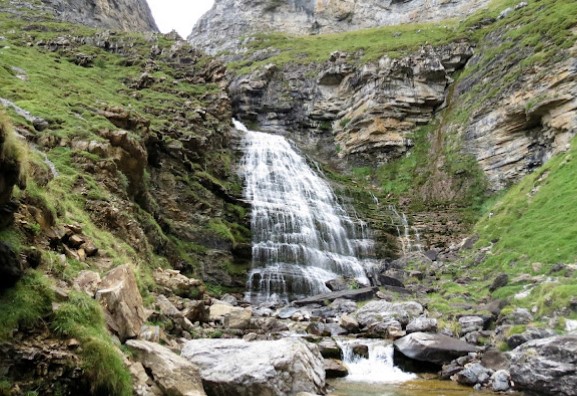 The waterfall voted the 'Best in the World' in 2019 is in Spain. image: google maps - Thierry

Spain has the waterfall voted ‘Best in the World’ in 2019

The Ordesa y Monte Perdido National Park in Huesca is one of the natural jewels of Europe. So much that in 1997 it was declared a World Heritage Site by UNESCO. It is one of the first protected natural spaces on the old continent.

These titles are explained by the incomparable beauty of the region, which comprises four valleys (Ordesa, Añisclo, Escuain and Pineta), with natural elements that are unique in the world. In fact, according to the British newspaper, The Guardian, in 2019 the Ordesa Valley was voted home to the best waterfall in the world.

They were referring to the Cola de Caballo, an impressive 54-metre-high waterfall. In the 2019 poll, it toped topping a ranking that included 20 waterfalls from different parts of the world.

The Ordesa Valley is located in the heart of the Aragonese Pyrenees, with hiking paths that run through the Pyrenees for 800km. In summer it is impossible to drive up there due to the large influx of tourists leaving no space whatsoever to park a vehicle.

One route follows the course of the Arazas River, a pathway that consists of 18.75km of terrain, with the highest and final point of the way being the Cola de Caballo waterfall, located at an altitude of 1,814 metres. For those who are not willing to travel 18km, it is possible to visit other waterfalls and spectacular natural landscapes within a shorter walking distance.

Specifically, after walking 45 minutes you reach the Arripas waterfall, which has a fountain. Another 500 metres further on, although steeper than the previous paths, there is a highly recommended detour to reach the viewpoint from which the La Cueva and El Estrecho waterfalls can be viewed.

The viewpoints are natural and the views are stunning. In fact, you can see how the water that falls from them has created holes in the rocks. For the more adventurous, the next key point on the route is the Gradas de Soaso. This is a succession of small waterfalls that can be reached after walking for approximately two hours.

At the end of the trail you find the jewel in the crown: the Cola de Caballo waterfall. At the bottom of the Llanos, after walking 45 minutes, the impressive waterfall can be seen. To return, you must take the same path you arrived by.

A journey by car from Huesca to Pradera de Ordesa takes around 90 minutes. The route combines the N-260, and A-23 roads. From Zaragoza, it takes 2 hours and 20 minutes on the A-23, while from Teruel you follow the same road but the time increases to 3 hours and 45 minutes.