Talks between Moscow and Kyiv postponed until tomorrow, Tuesday 15 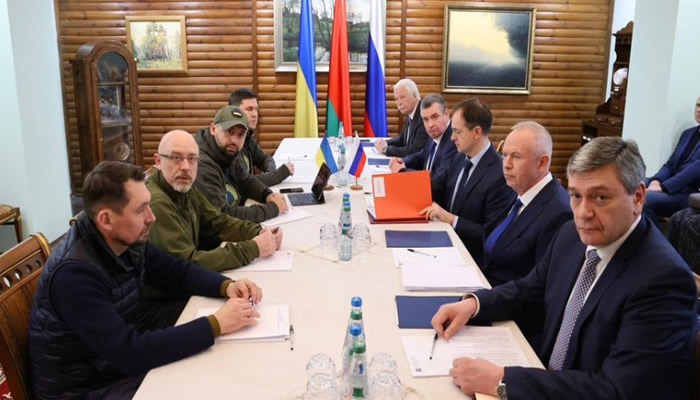 New round of talks between Moscow and Kyiv in Turkey this week. image: [email protected]

Mijailo Podoliak, the adviser to the Ukrainian President, reported today, Monday, March 14,  that the fourth round of face-to-face talks between Moscow and Kyiv have taken a “technical break” and will resume tomorrow, Tuesday 15.

Posting on his official Twitter account, without giving more specific details, Podoliak announced that the “recess” is intended to facilitate “additional work” by working subgroups, and the specification of certain definitions, “Negotiations continue”, he assured.

The negotiators still met this Monday via videoconference. On Sunday it emerged that the negotiating teams had begun to make slight progress in the talks for a ceasefire and the suspension of the Russian invasion in Ukraine, although there is clearly still a long way to go.

Podoliak said earlier in the day that the “immediate withdrawal” of Russian troops from the country and “security guarantees” would be discussed during the round of talks.

A technical pause has been taken in the negotiations until tomorrow. For additional work in the working subgroups and clarification of individual definitions. Negotiations continue…

Now into its 19th day, the conflict in Ukraine still sees Russian troops continue their advance towards the capital Kyiv, and attacks on civilian targets continue.

Officials from the United States and China are due to meet today in Rome, some hours after it was published that Russia requested economic aid and military material from the Asian country after the start of the invasion of Ukraine, something that the Chinese authorities deny.

It has also been reported via some media channels that India is prepared to help Russia by purchasing oil supplies that have been offered to its government by Moscow at a very discounted rate, as reported by larazon.es.