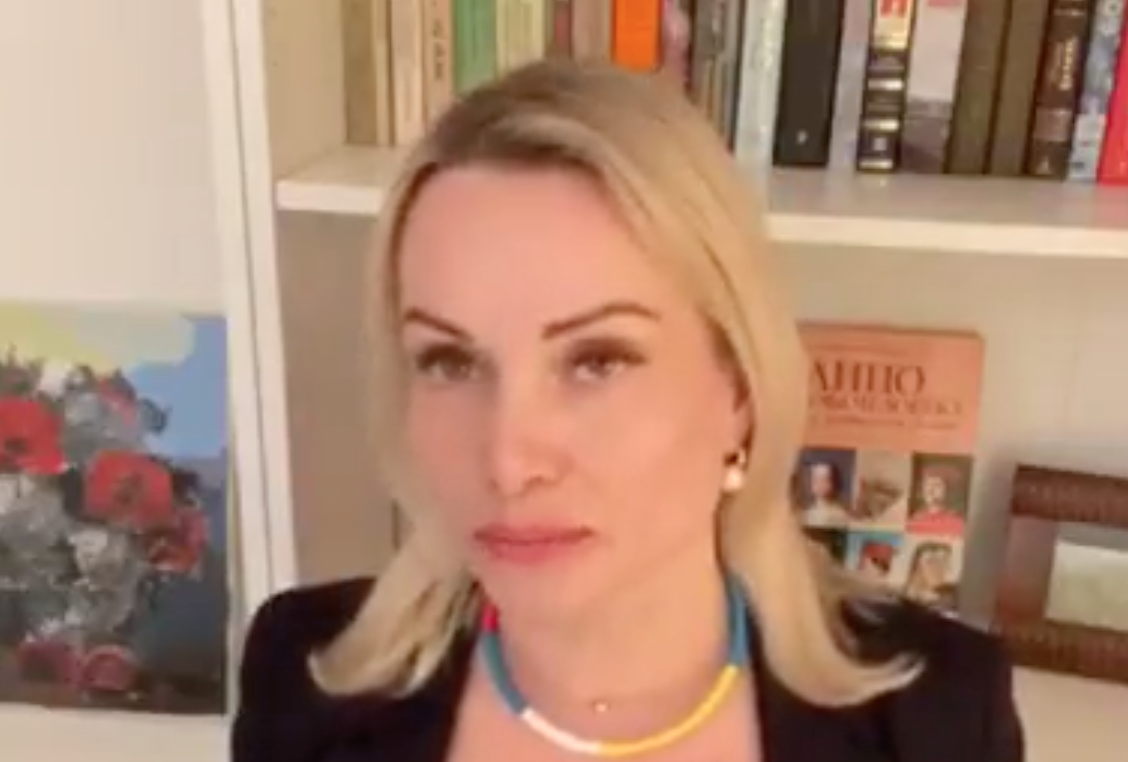 BRAVE Russian journalist and anti-war protester Marina Ovsyannikova stormed Russia’s foremost TV station on Monday, March 14 to tell viewers: “They are lying to you,” however, since then she has been missing, according to reports.

BBC News is reporting that Ovsyannikova, an editor at state-controlled Channel 1, was detained after interrupting the live broadcast holding an anti-war placard.

Marina appeared on the screen for a brief few seconds with a sign that read: “No war, stop the war, don’t believe the propaganda, they are lying to you here.” However, shortly after her shocking appearance onscreen during the live news report, the Russian’s whereabout has yet to come to light.

Despite knowing she had been arrested, lawyer Pavel Chikov said he was unable to find Ms Ovsyannikova.

“Marina Ovsyannikova has not yet been found. She has been imprisoned for more than 12 hours,” he said on March 15.

Another of her lawyers, Anastasia Kostanova, told BBC Russian she had “spent the whole night looking” for the missing journalist.

“This means that they are hiding her from her lawyers and trying to deprive her of legal assistance and, apparently, they are trying to prepare the most stringent prosecution,” Ms Kostanova said.

According to a fellow journalist, Kevin Rothrock, “four different defence attorneys have been scouring Moscow in search of Marina Ovsyannikova.”

“Nobody has been able to find her. Many hours have passed since anyone saw her,” he said.

Before storming the station, Ms Ovsyannikova had recorded a video, which soon went viral on social media.

In the video, she comments: “What is happening in Ukraine is a crime and Russia is the aggressor.

“Responsibility for that aggression lies on the conscience of only one person. That person is Vladimir Putin.

“My father is Ukrainian, my mother is Russian, and they were never enemies.

“The necklace around my neck is a symbol that Russia must immediately stop this brother-killing war and our brother peoples can yet reconcile.

“Unfortunately the past years I have worked at Channel One, working on Kremlin propaganda.

She went on to add: “We were quiet in 2014 when all of this was just starting. We did not go out to protest when the Kremlin poisoned Navalny.

“We simply watched this inhumane regime. And now the entire world has turned away from us.

“And another ten generations of our descendants will not wash themselves clean of the shame of this brother-killing war.

“We are Russian people: thinking, and intelligent. It is only in our strength to stop all of this insanity.

“Come out to protect. Do not fear anything. They cannot jail us all.”

Marina Ovsyannikova, an editor at a TV channel in Russia, interrupted a live broadcast with a sign that read “NO WAR. Stop the war. Don't believe the propaganda. They're lying to you here.” She has since been detained. This is an act of incredible courage. pic.twitter.com/BOJ70m2ztv

Since storming the TV set, in strict compliance with Russia’s ban on “calling it a war,” images of Ovsyannikova’s message have been blurred out on Russian news sites.

The bravery of the journalist was not lost on Ukrainian President Volodymyr Zelenskyy, who acknowledged Ms Ovsyannikova’s act during his nightly address.

“I am grateful to those Russians who do not stop trying to convey the truth. To those who fight disinformation and tell the truth, real facts to their friends and loved ones,” Mr Zelenskiy said.