Three arrested in Nerja for stealing €52,000 from an octogenarian 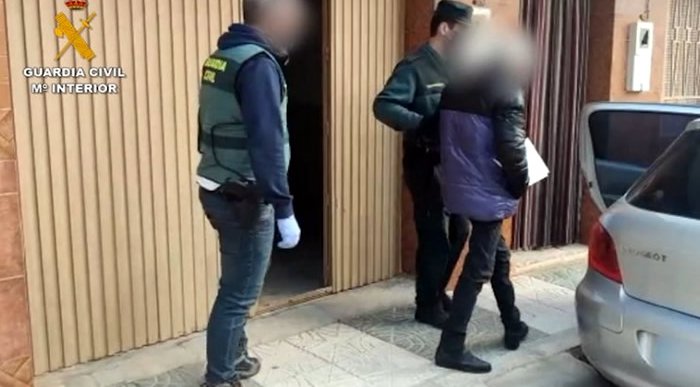 Three arrested in Nerja for stealing €52,000 from an octogenarian. image: guardia civil

Guardia Civil arrest three for the theft of jewellery and cash worth €52,000 from an octogenarian in the Malaga municipality of Nerja

Guardia Civil officers from barracks in the Malaga municipality of Nerja have arrested three people as the alleged perpetrators of the robbery in the home of an octogenarian. They are also accused of stealing all the savings she had. The detainees reportedly include her son, with whom she had no relationship for years.

‘Operation Vitra’ concluded with these three arrests. They stand accused of allegedly committing the crimes of robbery inside a home, fraud, disclosure, and the illegal use of a credit card to carry out purchases of exclusive brand products.

This operation began last November when an octogenarian reported a robbery inside her home located in the town of Nerja. Jewellery and watches worth €40,000, along with €12,000 in cash, was reported stolen by the old woman, all from her life savings.

A credit card allegedly stolen from the victim was used in various shops to make purchases worth €8,000. This discovery left the old woman in a critical state of precariousness because all her life savings had been taken from her, making her daily life difficult.

Investigators quickly verified that the perpetrators of the robbery had not forced their way into the house to commit the crime, so they determined that someone must have entered it using some type of tool or key in the entrance door.

This led the officers to the town of Villanueva del Trabuco, where the victim’s son lived with his romantic partner. It was found that he had not been in contact with his mother in a long time, and had numerous police records.

His partner was found to have made numerous purchases on October 31 in various establishments in the towns of Nerja and Malaga. Taking advantage of Halloween, they dressed up to make purchases in order to make their identification more difficult. All the purchases made by these people totalled €8,000, a figure that coincided with the purchases made with the stolen credit card.

After three months of investigation, officers proceeded to arrest the victim’s son and his romantic partner, as well as a third individual who, as a necessary collaborator, helped make the illicit purchases from the other two detainees.

Officers determined that the victim’s son had obtained a copy of the old woman’s house keys, enabling him to steal all his mother’s belongings and savings, together with his sentimental partner. He also stole the credit card and its pin code since he knew where his mother kept it.

A search was carried out in the detainees’ home, where officers found the disguises used by the alleged perpetrators to make the illicit purchases. They recovered all the items stolen from the victim’s home and the items purchased with the stolen card. These included a 55-inch television, perfumes, clothing, and exclusive brand footwear.

Also found in the search was a detonating pistol, six white weapons, two precision scales, 2.5 kilograms of marijuana buds, and four grams of cocaine. The three detainees have been made available to the head of the Court of First Instance and Instruction No2 of Torrox, as reported by malagahoy.es.