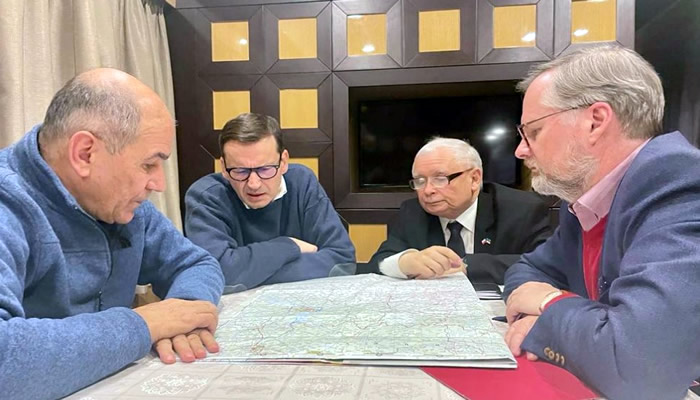 In what is seen as a bold and symbolic gesture, on Tuesday, March 15, the prime ministers from three EU states decided to take a train to Kyiv. Even with the city under constant attack, they undertook the perilous journey, to show solidarity with the besieged leader.

The politicians from Poland, Slovenia, and the Czech Republic had arranged a face-to-face meeting with Ukrainian President, Volodymyr Zelenskyy. Officials in Brussels had warned them of the obvious security risks involved in making such a trip. Even so, they followed through with what was originally believed to be a Polish idea.

Mateusz Morawiecki, the Polish prime Minister tweeted images of them all sitting around a table together. ‘It is here, in war-torn Kyiv, that history is being made”, he posted.

‘It is here that freedom fights against the world of tyranny. It is here that the future of us all hangs in the balance. EU supports UA, which can count on the help of its friends – we brought this message to Kyiv today’.

Flying to Kyiv was dismissed to avoid provoking the Russian leader

Also present were Czech Prime Minister Petr Fiala, and Janez Jansa from Slovenia. It is thought the decision to take the train was not to provoke Vladimir Putin by flying to Kyiv. By making this journey, the three became the first international leaders to visit Ukraine since the invasion began. There is so indication of how long they will stay in the capital.

Marcin Przydacz, the Polish deputy foreign minister called the trip ‘risky’, but said, ‘Nevertheless, the prime ministers decided that this risk is worth taking for the sake of values. For the sake of our common security, and for the sake of solidarity with the Ukrainian nation’.

Mr Przydacz pointed out on Polish television how in 2008, after Russia invaded Georgia, in a show of support, the leaders of Poland, Ukraine and the Baltic states flew to Tbilisi. ‘At that time, neither the Polish president nor his Ukrainian colleague lacked the courage to stand on the side of the attacked nation’.

‘We know that you are fighting not only for your homes, for your freedom, for your security, but also for ours’, was the message from Poland. ‘The courage of true friends of Ukraine!’, responded Mr Zelenskyy, who reportedly told the ministers, ‘Our visit is a powerful expression of support for Ukraine”, as reported by metro.co.uk.