Consumers in Spain already being affected by transport workers strike 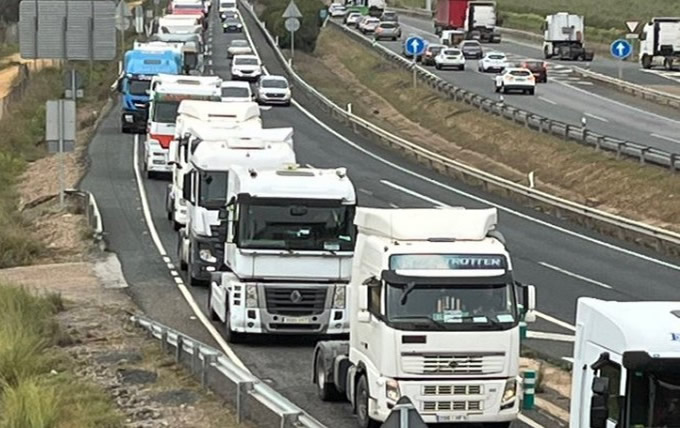 Consumers are already being hit by the indefinite transport workers strike in Spain. Perishable items are being reported as in short supply on supermarket shelves, as well as in fish markets and food markets.

Milk and dairy products are already noticeable today, Thursday, March 17, by their shortage from the shelves of supermarkets because of the transport blockade. Inlac, the Interprofessional Dairy Organisation, has warned that the collection of milk from farms, packaging, processing of dairy products, and distribution to the chains, is in danger.

“The dairy sector shares the impact of the unstoppable rise in fuel prices and respect for the right to strike, but calls for everyone’s responsibility not to paralyse the dairy sector or cause its collapse”, said a spokesperson for Inlac.

“The interruption in the circulation of trucks is endangering the supply of feed to farms, packaging, and materials to production plants, and the output of milk and other finished dairy products to supermarkets”, they continued. Items such as milk need to be collected and treated daily they pointed out.

“Trucks with feed for livestock and other supplies cannot enter many farms while, on the other hand, manufacturers are being affected by their supply network of materials for packaging and the exit of products to the markets, as traffic is being interrupted in large areas of the Spanish state”, it added.

Inlac’s statement comes one day after dairy manufacturers announced a halt in production, starting today.  The National Federation of Dairy Industries (Fenil) explained that it has been forced to suspend its activity as a result of the protests by the carriers, and the pressure exerted by the informational pickets.

Today, Thursday 17, the dairy sector has been joined by the producer and industrialist of poultry meat, which has demanded responsibility from the callers of the strike to avoid “serious problems” in the agri-food chain.

The Spanish Interprofessional Association of Poultry Meat (Avianza) has voiced “great concern” about the collapse in the transport of goods, which is “critically” affecting both the raising of poultry and the distribution of poultry meat to supermarkets in Spain.

They warned that delays can lead to serious problems “both in animal welfare, and in the management of birds on farms”, with more than 46 million chickens produced each month, and 1.5 million daily.

Aecoc, the Sea Products Committee of the employers’ association, demanded this Thursday the cessation of the coercion and violent actions that are taking place against carriers not adhering to the transport strike. They assured that the supply of fresh fish throughout the country is becoming difficult.

Since the start of the strike last Monday, hundreds of tons of fish have been blocked in ports and fish markets. “Especially worrying is the situation in Galicia, where deep-sea vessels are unloading their catches in ports and now they cannot redistribute a merchandise destined for the whole country”, said a statement from Aecoc.

In the case of Andalucia, the inshore fleet has been forced to moor ships in many fishing ports as the sale of daily catches is not guaranteed.

“We understand the demands of the transporters adhering to the strike in the sector, but the actions of the pickets are putting at risk the integrity of the professionals, and the sale of fish in many Spanish markets. It is not tolerable that their actions harm an essential and strategic sector such as fishing”, commented Eduardo Miguez, president of Aecoc.

In Jerez, the only sugar factory that operates all year round in Spain has had to stop this Thursday. The Jerez de la Frontera Sugar Factory can only refine the last 450 tons today. A normal day of activity exceeds 1,600 tons. “For days, no truck has accessed the facilities where more than 80 trucks loaded with raw cane sugar arrive daily,” the company said in a statement, as reported by abc.es.