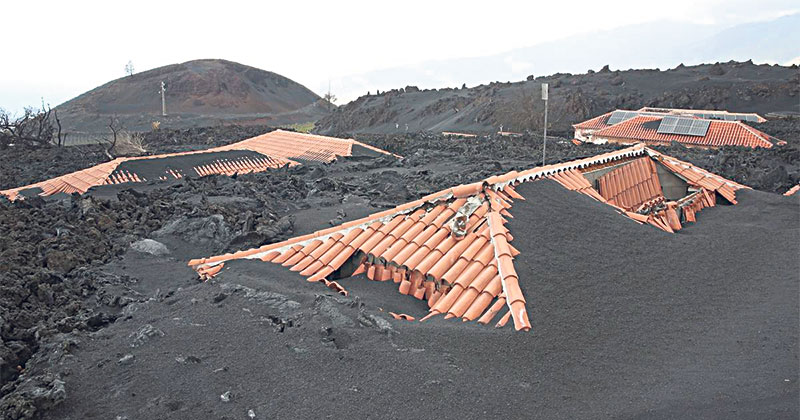 GOOD NEWS: The volcanic ash can be used for other purposes.

Fingers crossed that during the interval between me writing this and your kind perusal of it, the megalomaniac with his finger on the nuclear button gets struck by lightning. We need divine retribution here. Our leaders are incapable of action. Incredibly, thousands of innocent people will die because of him. Have you seen his dead eyes? We’re in trouble.

I alternate between ostriching the whole disaster and making plans for a well supplied bunker. Looking at the planet’s prevailing winds to see how safe we’d be here from fallout was a bad move. Nobody’s really safe.

Heading out of pandemic and volcano frying pans into the apocalypse fire, hoping for the best with spring’s advance visible everywhere, life in the Canaries continues apace.

Here’s a pòtpourri of island news. May it distract you from larger issues beyond our control, although understanding how one nutter sends generations of innocent people to their deaths is incomprehesible.

Forgive an ingenuous question: if eveybody said “No thanks, I’ll pass. Go yourself if you fancy a war,” could would-be warmonger/s imprison and punish a whole population for disobedience? Isn’t this all about lack of a united refusal, or is unity impossible with 50 per cent of humans testosterone-driven?

Back to the news, mostly good. The islands are full of tourists finally able to travel, looking for safe winter sun. We’re so happy, we can hardly count.

On the island of Lanazarote and tiny neighbour La Graciosa, a Newfoundland dog called Urko, trained to save lives at sea, has joined the Emerlan Canine Unit NGO, which recently celebrated its 20th anniversary on the islands. Newfoundlands can save up to six people and are capable of towing small boats to safety.

Also in Lanzarote, two Guinea-Bissau passengers arriving at the island airport via Madrid were arrested for drug running when found to have swallowed 169 capsules containing nearly two kilos of cocaine between them. Vigilance at the airport was increased after three other ‘mules’ were arrested in January.

The traditional Canarian role as intercontinental waystation between Europe, Africa and the Americas lives on. Cocaine comes from South America, not Africa’s west coast, and is destined for rich Europe.

African ports are easier to enter with dubious cargoes than Eurpoean and, as for unfortunate mules, poor Africans are closer to Europe than poor South Americans.

La Palma’s recovery from the Cumbre Vieja volcano is a long story, but there’s some good news: once removed from property, fincas and natural landscapes, millions of tons of volcanic ash can be used for construction of new roads and buildings and as fertiliser.

On El Hierro, the recovery of the island’s ancient giant lizard, Gallotia Simonyi Machadoi, prospers with the declaration of the present Recovery Centre ‘Zoological Park’.

Tenerife, currently in muted Carnaval mode, will shortly offer the Canaries’ first drive-in cinema with a 650 car capacity and in Fuerteventura concern grows in ever continuing drought, which is changing the island’s landscapes.

Good luck to us all!