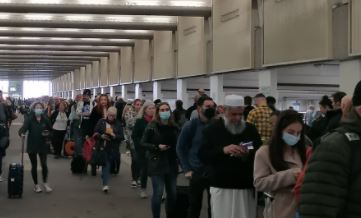 TUI and easyJet have issued advice to travellers over ‘horrendous’ Manchester Airport queues. Passengers were frustrated as queues got so bad that flights were missed. The Terminal 1 queues reportedly made it all the way out to the car park.

Travellers took to social media to complain about horrendous queues at the airport. Some passengers said they had waited over three hours before even making it to airport security.

EasyJet flies to over 70 destinations from Manchester Airport. The airline advised customers that they were aware of the security delays. A spokesperson for easyJet commented: “We are aware of security delays at Manchester airport today and so are advising customers to arrive at the airport with plenty of time ahead of their flight. We continue to work with Manchester airport to ensure our customers’ experience through the airport is as quick and easy as possible.”

easyJet uses Terminal 1 at the airport.

Tui also warned customers about the delays. The airline flies to Spain, Portugal, France and Greece along with other exotic destinations from Manchester airport.

Speaking to The Echo a spokesperson for Tui stated: “We’re advising customers to arrive up to three hours before departure and to allow extra time to go through security before going to their boarding gate.”

Commenting on the issues a Manchester Airport spokesperson explained: “At times today, security queues in Terminal One have been significantly longer than we would like due to a combination of factors. With the rapid recovery of international travel, it has been much more difficult to predict passenger volumes based on the flights that are due to depart.”

They went on to add: “We saw more people than we were expecting, which put a considerable strain on our operation. This was compounded by up to 60% of customer bags being rejected as they passed through security because they contained restricted items – a much higher rate than we typically experience.”