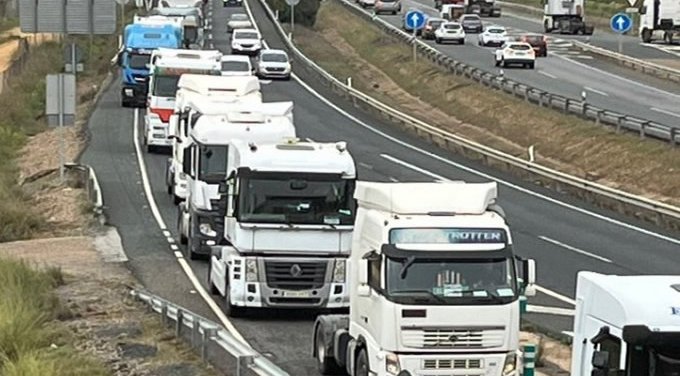 Each day the transport strike continues, the fruit and vegetable sector of Almeria is losing €10 million

Coexphal, the Association of Organisations of Fruit and Vegetable Producers of Almeria, announced on Thursday, March 17, that for each day the transport workers strike continues, the sector loses €10 million.

The action has now lasted for four days, and the so-called information pickets are acting seriously. As a result, Coexphal has demanded that the Ministry of the Interior implements more forceful measures than those adopted until now. This is necessary they say to ensure the free movement of merchandise, especially fruit and vegetables, given their perishable nature.

After a meeting with Manuel de la Fuente, the sub-delegate of the Government, Luis Miguel Fernandez, manager of Coexphal, commented, “We share and respect the demands of the truckers in this protest, but we also defend the right to free movement of goods, and the right to work of thousands of workers in the sector (transporters, handlers, farmers), who are currently being abandoned without any defence by the authorities”.

Mr Fernandez requested the creation of safe corridors so that the fruit and vegetables that supply Spain and Europe reach their destinations in perfect condition. According to the Coexphal figures, in Almeria alone, some €10 million are being lost for each day of the strike.

This has direct and indirect repercussions on the economy, not only of the trading companies but also that of its workers and farmers, who cannot sell their goods.

The association warned again of the danger of shortages if this situation persists and no action is taken against the pickets, or measures are approved to end the mobilisations. Consequences of which can already be seen in some supermarkets in the country, and will soon reach the rest of the European market.

Coexphal pointed out that the demonstrations and actions carried out in support of the Platform in Defense of Road Transport do not have the relevant permits and are acting outside the law. This has been demonstrated they said by the numerous incidents that have worsened over time.

They requested the imposition of fines and arrests where necessary, to guarantee safety and activity, as reported by diariodealmeria.es.