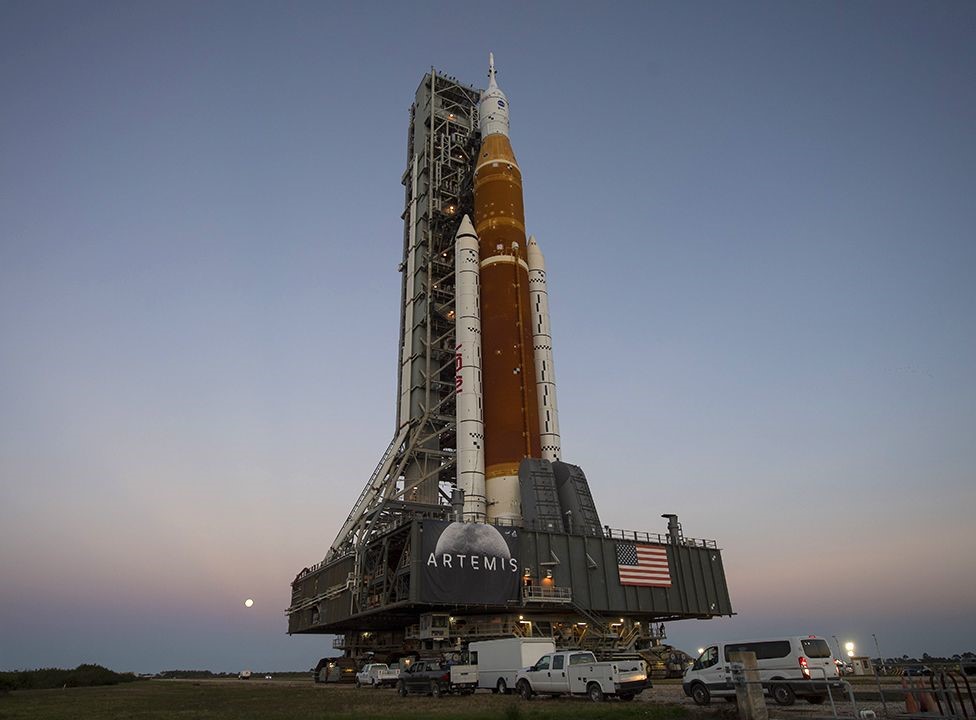 NASA has debuted its new Space Launch System (SLS), with the giant rocket taken down to the pad at the Kennedy Space Centre in Florida to conduct a dummy countdown.

NASA has plans to send a test rocket around the moon in a couple of months’ time, with a view to sending a manned mission within the next five to seven years.

The enormous rocket at a little under 100m in height is designed to be much more powerful than the Apollo vehicles of the late 60’s and 70’s, effectively having the ability to travel well beyond the moon as well as to carry significantly more equipment.

The rollout gave everyone the first opportunity to see the rocket and all its different elements fully stacked together.

Tom Whitmeyer, Nasa’s Associate Administrator for exploration systems development said: “The first rolling out of the VAB – that’s really an iconic moment for this vehicle.

“To be here for a new generation of a super-heavy-lift, exploration-class vehicle is a day to remember.”

The rocket was moved on a massive mobile launcher that is over 120 m high and weighs more than 5,000 tonnes. Moving very slowly, with a cruising speed of just over 1km/h, it took 11 hours to move the rocket to the launch pad, although it is only 5km from the VAB. Engineers stopped and started the tractor along the way to check everything was as it should be.

A “wet dress rehearsal” is expected to take place on April 3rd, which will see the rocket loaded with propellants and taken through a practice countdown all the way to a mere 9.4 seconds before the moment of lift-off. The “scrub” point is just before they would normally light the four big shuttle-era engines under the rocket.

Should the wet run go to plan, NASA will then be able to set a flight date possibly late June or July. The first mission will involve a 26-day journey that includes an expanded orbit around the Moon.

Elon Musk at SpaceX is understood to be developing an even larger rocket at his test facility in Texas. Known as the Starship, the rocket has yet to have a maiden flight but unlike SLS it has been designed to be totally reusable.

A recent assessment from the Office of Inspector General, which audits Nasa programmes, found that the first four SLS missions would each cost more than $4bn (3.6 billion euros) to execute. The continued saying the cost was unsustainable whereas the SpaceX rocket is coming in at a significantly lower investment.

The drive by China and others has resulted in NASA once again stepping up its programme but as the giant new SLS Moon rocket debuts it is questionable whether the US will once again take the lead in the space race.