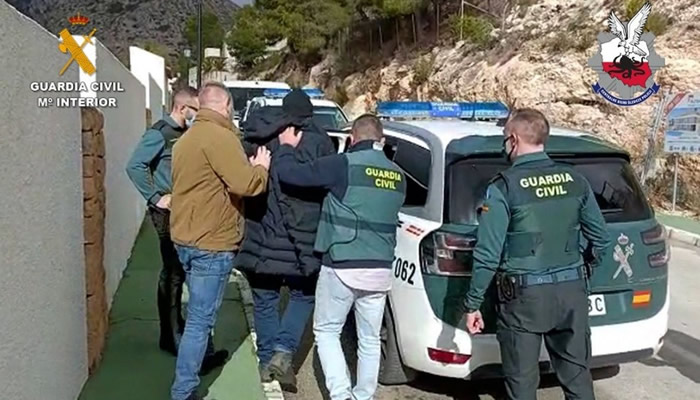 Civil Guard officers, in collaboration with the Polish Central Bureau of Investigation, have arrested 13 members of a criminal organisation of Polish origin. They were suspected of being dedicated to drug trafficking from Spain to both Poland and the Scandinavian countries.

Coordinated by Europol and Eurojust, ‘Operation Bratva’ was initiated at the end of 2020. A criminal gang had been detected operating in the province of Malaga, made up of people known to have extensive records related to drug trafficking.

Investigators quickly established that the organisation were making use of a warehouse located in an industrial estate in the Malaga municipality of Coin. A surveillance operation detected the frequent movement of those under investigation in the aforementioned place, where heavy vehicles entered in the middle of strong security measures.

During one of the surveillances, a large-tonnage truck was observed arriving at the warehouse. It was subsequently loaded in the middle of the night, and eventually intercepted on the A-7 motorway in the province of Malaga.

A first inspection inside the vehicle uncovered ceramic material and marble structures. With the help of a sniffer dog, 65 kilograms of marijuana, and 117 kilograms of hashish were found hidden among the merchandise.

As a result, the driver – of Serbian nationality – was detained. He informed the officers that the destination of the cargo was Sweden. The investigation remained open for several months, allowing three members of the organisation to be followed during one of the drug shipments.

Finally, another interception took place, this time on the A-92. Searching the vehicle, officers discovered a false bottom with three 30.6-kilogram packages of hashish tablets hidden. The driver, a Polish national, was detained.

As reported by the Guarda Civil, entries and searches were made at homes in Estepona, Marbella, and Coin. These resulted in the seizure of 56.6 kg of hashish, €2,355 in cash, four vehicles, taser guns, walkie talkies, electronic material, and various documentation.

Police garments, such as vests, t-shirts, identification badges and masks, all with the emblem of the Guardia Civil were also confiscated. Such items are used by drug trafficking organisations to impersonate members of the Security Forces, in order to steal from other drug traffickers, which in criminal jargon is known by the term ‘rollover’.

As a result of the continuing investigation, two more Polish citizens were arrested. In a similar operation in Poland, in the presence of Guardia Civil officers, the Polish police arrested seven more members of the organisation, including the treasurer.

Finally, the leader of the gang was detected residing in a luxury urbanisation in the Alicante town of Altea. He had 31 previous accusations of crimes related to drug trafficking in his country. Another senior member of the gang was also detained in the Malaga town of Estepona.

Two homes were searched, which resulted in two men being arrested. Police seized numerous electronic devices containing information of interest for the investigation, and documentation for analysis. More than €300,000 in cash was also found hidden in one of the houses. The leader of this gang is considered an important drug lord in Poland and the Scandinavian countries, as reported by laopiniondemalaga.es.