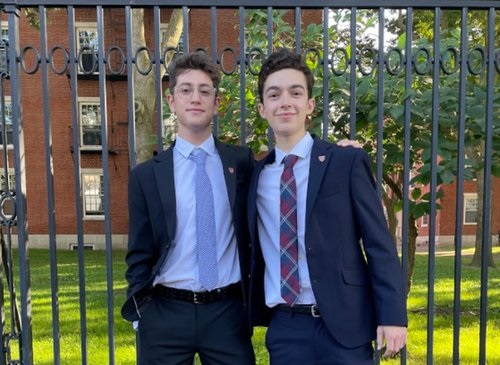 Avi Schiffman couldn’t sleep after attending a protest against the Russian invasion of Ukraine, a sleepless night that led to the 19-year-old and his 18-year-old friend coming up with the idea to create a ‘AirBnb’ for hosting Ukrainian refugees.

The young Californians spent the morning after the protest throwing ideas around as to how they can help and that’s when the idea of project Ukraine Take Shelter was born.

The two tech savvy teens took less than three days to create the webpage they hope will become instrumental in connecting Ukrainian refugees with hosts.

Since it went live, the site has already attracted more than 10,000 hosts around the world.

In a video call to El Pais they said: “It’s exciting. We’ve made something useful and people are using it.”

Creating such websites is not new to Schiffman who created nCov2019.live, to track the pandemic becoming one of the busiest sites receiving 30 million visitors every day. That les to him being recognised as “Person of the Year” by the Webby Awards, which recognises the world’s best websites.

He has turned down an offer of $8 million (7.2 million euros) to add advertising to his website. “I don’t need it, there are much more valuable things than that.”

He and Burstein, whom he met at Harvard, are working together to make the site work. They say until the invasion they knew little about the country, saying they didn’t realise how big the country was

Ukraine Take Shelter has a simple and intuitive interface, not dissimilar to the room booking site AirBnb. They say: “The point is for it to be used by people who, unfortunately, are under high levels of stress. We can’t understand why the only solution should be filling out forms and infinite paperwork.”

For refugees they simply enter their location and details, immediately receiving offers from hosts in nearby cities. They can specify the number of people who seek asylum, or search by any filter imaginable: age, length of stay, medical needs, transportation, pets and more.

Schiffman says: “We want it to be really easy to use.”

Fearing a possible Russian hack the two have worked to make the site as secure as possible saying after rumours of a breach: “That was one of the threats that we were counting on from the beginning.”

The site has been reinforced to protect it from cyber attack and they now verify users’ data in order to avoid fraud. Apparently “The algorithm punishes any suspected automated activity, so there’s no room for bots on the site.”

One of the site’s great advantages is that anyone can volunteer to be a host.

“Anyone who has a free space is welcome, whether it’s a mattress or an entire apartment,” adding that “France and Germany have a lot of users, but Spain is also close. People from all corners of the planet are joining. It’s incredible to be able to help despite being thousands of kilometres from the conflict.”

The two boys haven’t seen each other in person for months saying: “We live in a fully digital world. A project like this would have been impossible a few years ago, but today you can learn anything online. Age isn’t an obstacle for anyone.”

Schiffman says: “Everything I knew about programming before entering Harvard I learned on YouTube. If you know how to ask the question, you’ll always find the answer.”

Ukraine Take Shelter has continued to grow, surpassing 100 million views, and Schiffman and Berstein are working tirelessly to continue to develop it. Now available in a dozen different languages Schiffman says: “Right now we’re focused on polishing all the bugs and adding updates that improve the user experience.”

The site is now also compatible with Viber, the most popular messaging application in Eastern Europe.

The two teenage students are trying to catch up on their sleep, still not believing that the AirBnb site they create for people hosting Ukrainian refugees has become such a success.