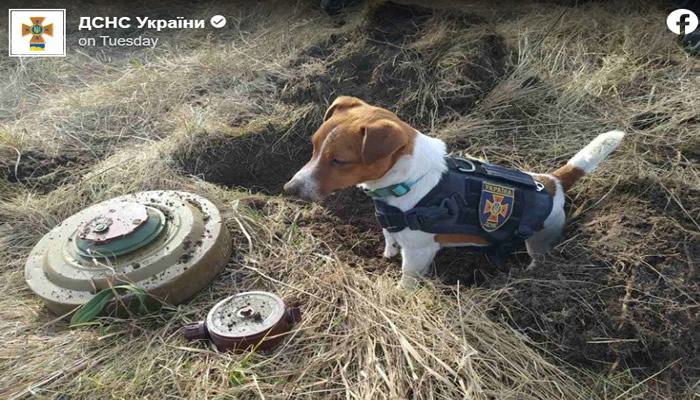 The Ukrainian military has a new hero, a Jack Russell terrier who is an explosives sniffer dog

A Jack Russell terrier, in recent days, has become one of the new heroes of the conflict between Ukraine and Russia. His name is ‘Patron’ and he is in charge of sniffing out and detecting mines and explosives laid by Russian troops.

Dressed in a tiny military vest, the Ukrainian State Emergency Service (DSNS) has been boasting on social networks about the amazing exploits of this incredible canine since the war began. They are hailing him as one more member of the special anti-bomb team. Between the military’s bomb disposal units, and ‘Patron’, they have already deactivated about 90 explosive devices.

“He is two years old. He is the soul and the mascot of our Chernigov pyrotechnicians”, is how the DSNS introduces their little ‘Patron’. Everywhere the Ukrainian special team go, this smart terrier accompanies them.

“By the way, he likes cheese a lot, so our boys are taking advantage of the occasion and are pampering him, to locate the mines and explosives”, they add on the social network post.

Thanks to their powerful sense of smell, dogs are often highly effective at detecting explosives or gunpowder, not only at airports but also in emergency settings. There are believed to be more than 750 dogs working in mine detection programs in some 23 countries.

Since World War II, dogs have been used for these special missions. The olfactory system in the dog brain is about 40 times larger than in humans, as reported by larazon.es.