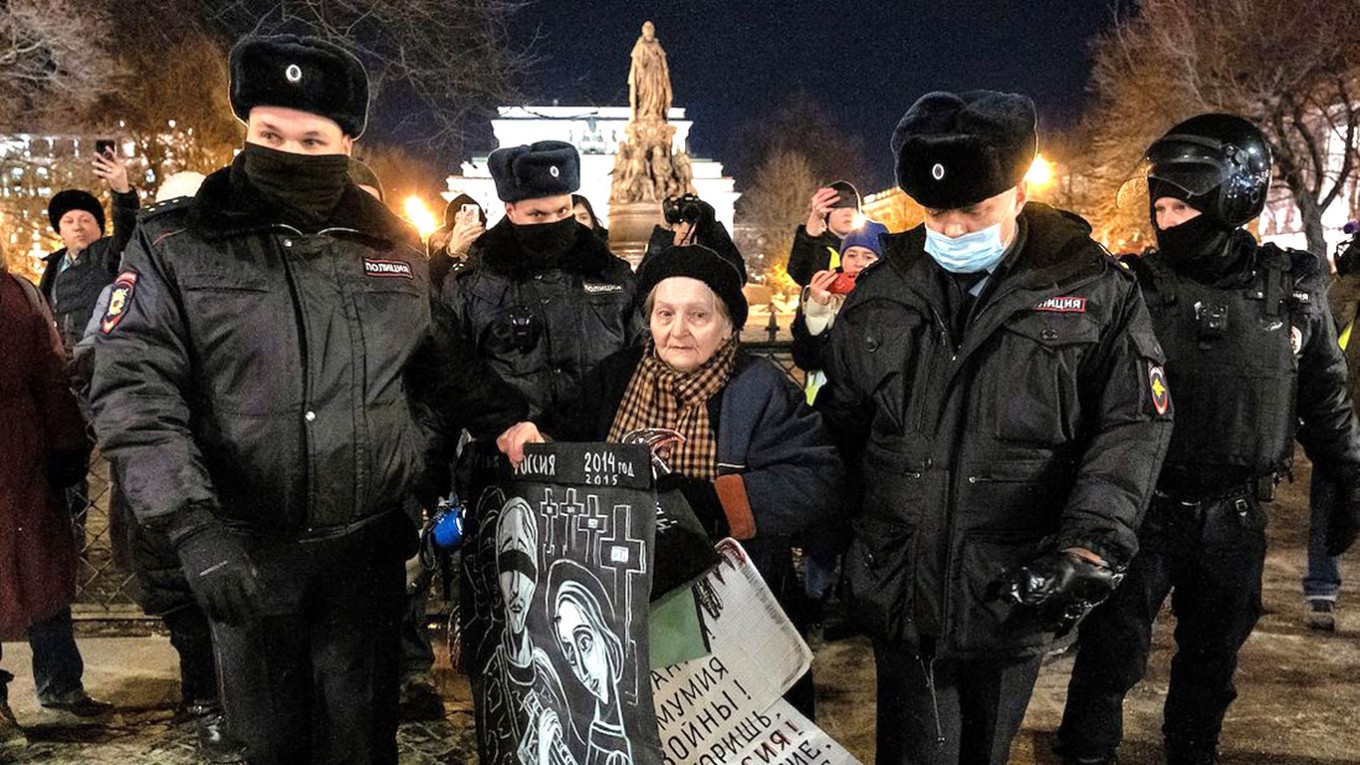 An artist and pensioner, 77-year-old Elena Osipova has become the face of Russia’s anti-war protest movement in Leningrad, with footage of her frequent detentions by police going viral.

Osipova was born at the end of World War II in a Leningrad that had been devastated by a brutal 900-day Nazi blockade. There she saw first-hand the tragic consequences of war as she did the devastation of her home town and her community.

The Kremlin’s so-called “special military operation” has prompted many Russians to show their displeasure, taking to the streets to protest against the country’s invasion of Ukraine. More than 15,000 have been detained under draconian laws that seek to quell any dissention or information that is not supportive of the government’s sending troops into their neighbour.

Police presence in Leningrad is according to the Moscow Times heavy at all times, with anti-war protesters typically gathering at Gostiny Dvor, a shopping centre along the city’s main artery Nevsky Prospekt.

The news agency caught up with her outside the Chernyshevskaya metro station where there was no police presence. Standing alone she wore a bulky winter coat and holding up two big protest signs.

An artist by training and occupation, Osipova has been speaking out against injustice and tragedy in her home country for two decades.

Her first protest followed the 2002 Nord Ost siege, when militants held an entire theatre in Moscow hostage. Security forces used of toxic gas to neutralise the terrorists killing hundreds of civilians trapped inside the building.

She told The Moscow Times “They planned for three days, and the planning resulted in storming [the theater] and human loss. Since then, I have not been silent.”

Osipova took to the streets again in 2004 following the Beslan school tragedy in Russia’s North Caucasus. After terrorists took the school hostage, security forces stormed the building, resulting in the deaths of hundreds of schoolchildren.

“Nord Ost was the warning. And still, Beslan happened,” she added.

Osipova has continued to protest for the freedom of political prisoners, most notably Alexei Navalny, the anti-corruption campaigner imprisoned last January after surviving a near-fatal poisoning.

She also participated in the 2014 Marches for Peace that opposed Russian intervention in Ukraine following its Maidan revolution. The movement however was short lived as police crackdowns and fractures in the Russian opposition took their toll.

Osipova says: “In the past, I was connected with the opposition. But now I don’t always agree with their views. So, I go out separately, alone. It is very harmful for the movement when such disagreements happen.”

A former teacher at three art schools, Osipova stopped working a while ago, although she still holds art exhibitions from time to time. She is not new to detentions saying she has seen the inside of many prison cells, but she says: “[With my protest signs] I’m continuing this likbez of sorts,” referring to the Soviet anti-illiteracy program.

Many passers-by talk to Osipova and many thank her for taking a stand, however few have the courage or the conviction to join her.

One woman told her: “Thank you so much for taking a stand here! It takes so much courage,” to which she replied: “Thank you, I see such people here today. I nearly died when I heard that 70% [of Russians] support all this. See, it’s very scary.”

But the woman corrected her saying: “Propaganda. Thank you and good luck!”

Putin has moved to crackdown on all support for Ukraine from having people detained for wearing Ukrainian colours to spreading what they deem disinformation, even for holding up blank pieces of paper at protests.

Osipova says she is detained often and released with fines, however she seldom pays them as she cannot afford to as a pensioner.

“Yes, they detained me and fined me. But I didn’t pay the fines. I’ve got nothing to pay them with. My pension is small. It was impossible to pay, so they started withholding money from my pension. For more than two years I’ve been getting just half of my pension. That was the way they punished me. And no appeals would work.”

Her protests have won her many friends, the electricity department coming to fix her apartment after months of trying to get someone to fix the problem.

With all the media interest in her she says the police have taken to photographing her and her signs, rather than arresting her.

“The militia [old name for the police in Russia] also has humans in it. Especially the young generation. There are a lot of women in [the police force] now. They are trying to shield me, in a way.”

Osipova says that she has hope for many of Russia’s young people who do not support the government and its politics. But she says she is sceptical about the ability of the anti-war movement to achieve change.

“So many things have already happened. It is too late. There weren’t enough mass protests. Right now, it’s best to look for other ways.”

Not everyone is supportive of her with some critical of her views and others embarrassed for her and her protests. But she remains undeterred although she is not sure for how long she can keep it up.

“My legs are barely moving now. We couldn’t go to the doctors during Covid-19, so we didn’t keep our ailments under control. I have a second-degree disability, too,” she said.

Osipova says she welcomes the attention, especially on the global level, since it can raise awareness toward Russia’s anti-war movement.

Dubbed the “Conscience of St. Petersburg,” she says she doesn’t like the nickname. “Because people with no conscience are often using conscience as a shield, you see.”

The world needs more like Osipova, people who are not afraid to become the face of protest movements like Russia’s Anti-War Movement – perhaps the only way to bring about change in an authoritarian country.