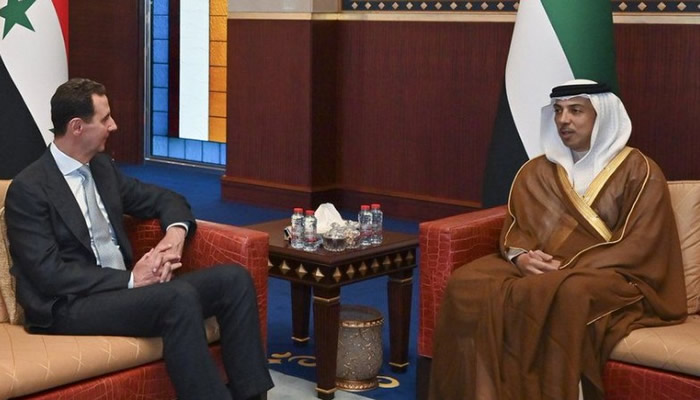 A meeting took place last week between Mansour bin Zayed Al Nahyan, a member of the ruling family of Abu Dhabi – who is the owner of Premier League champions, Manchester City – with Bashar al-Assad, the President of Syria.

The Syrian President is a well-known ally of Vladimir Putin, and their meeting has sparked controversy in the United Kingdom and the United States.

Held in the capital of the United Arab Emirates, the two men reportedly discussed issues such as security in the region. Bilateral relations between the two countries were also discussed, in what was the first official visit of the Syrian president to the country since 2011.

Their meeting was believed to have been made with the aim of ratifying the UAE’s support for Syria on unity and stability. It has since been condemned by the British Government, who accused Sheikh Mansour of “not contributing to peace”. The United States had already signalled the visit of the Syrian president, accusing him of “horrible atrocities.”

As a result, Labour MP, Chris Bryant, addressing the House of Commons, questioned whether Sheikh Mansour is a person worthy of owning a Premier League club.

“There has been a barbaric and sustained massacre in Syria, co-directed by Assad, and now Putin is waging the same war of aggression against Ukraine. And now there are people who want to meet with them?”.

Human rights activist, Nicholas McGeehan, went one step further, asking for sanctions to be placed on Sheikh Mansour, similar to those imposed on Roman Abramovich. The Russian billionaire owns Chelsea FC, and has had his financial assets frozen by the UK and the EU, due to his alleged links to the Kremlin, as reported by as.com.