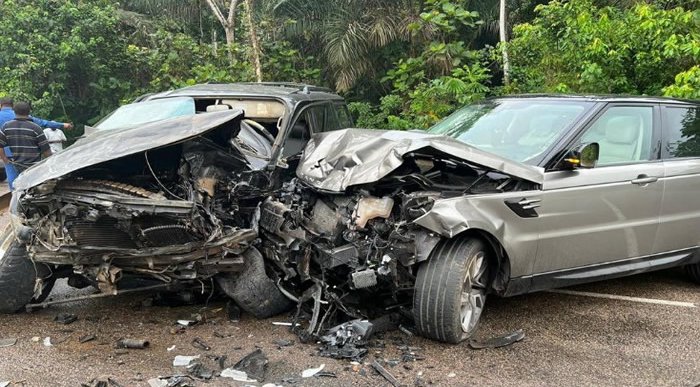 Andre Onana, the Ajax and Cameroon goalkeeper appears to have survived intact from what looked like a horror car accident this morning, Tuesday, March 22, reported The Sun. When the incident occurred, the 25-year-old was apparently on his way from Yaounde, the country’s capital, to the international team’s Douala training camp.

Onana’s vehicle was allegedly involved in a collision with two other cars, and images from the scene show that all the drivers had a lucky escape, but it was reported that nobody was hurt. The stopper was known to have been travelling to meet up with the rest of the Cameroon players in preparation for their crunch World Cup play-off match with Algeria.

Since Ajax’s regular first-choice keeper, Maarten Stekelenburg, was ruled out for the season due to injury, Onana has stepped up and claimed the spot as his own. He has recently turned down a new contract with the Dutch giants, with whom he has already won the Eredivisie title twice, since joining the club in 2016.

His contract expires in June, when he will be a free agent, and he was an Arsenal target. It has been confirmed by the famous Italian football journalist Fabrizio Romano though that a five-year deal worth around £2.5million per year has already been struck with Serie A giants Inter Milan.

Adding, “At the end of the day, life is about making choices. I think I did a great job for this club for so many years already and I think that my time is over in Ajax”.