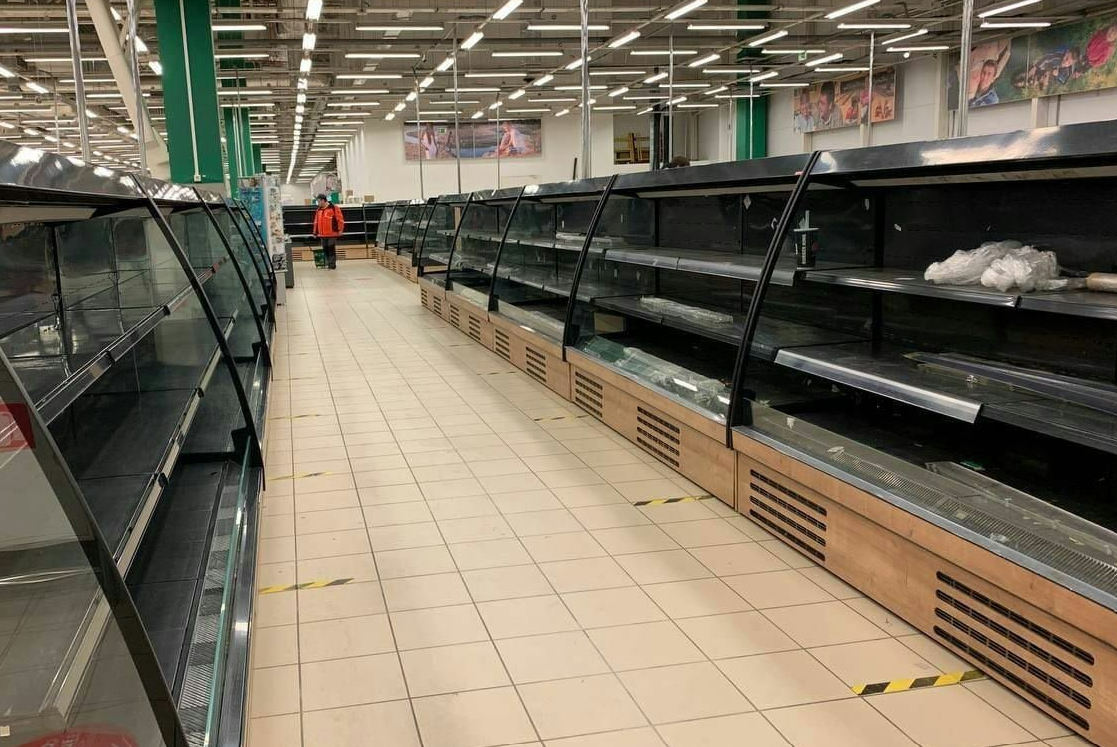 Shelves and banks are swept clean in Russia as more sanctions are imposed. Image - Twitter

Russians are withdrawing a record amount of money from banks and shelves in supermarkets are being swept clean as the invasion in Ukraine continues and the cost of living increases.

Record sums of money are being withdrawn from banks in Russia amid soaring inflation and shortages of products from medicines to food. According to the central bank, the personal savings of Russians plunged 3.5 per cent ( (£8.7 billion) last month – thought to be the largest withdrawal in a month since the Soviet Union collapsed.

Western sanctions have stopped the central bank from being able to access around half of its $640 billion in gold and foreign currency reserves.

The rouble has fallen to a record low and weekly inflation has hit 2.2 per cent, with analysts at Goldman Sachs saying the economy in Russia is set to shrink by a huge 10 per cent and with announcements today that the cost of living in Russia has increased by 14 per cent.

Shelves in shops are being emptied of personal hygiene products amid panic buying, bringing back memories of the late Soviet era when shortages were rife. Supermarkets are rationing sales of staple foods such as flour and sugar and videos are circulating on social media of shoppers scrapping over items.

Medicine shortages in chemists are increasing, with doctors reporting shortages of 80 medicines including essential insulin and pain killers, while sales of anti-depressants have multiplied by four – showing the current state of mental health.

Around 400 companies, including McDonald’s and Coca-Cola, have stopped or suspended sales in Russia in protest of the invasion of Ukraine. This is expected to leave around 200,000 people without a job. Apple suspended the sale of its products in Russia last month, with Ukraine urging it to block Russian users from access to its app.

Pro-Kremlin figures have started posting lists of so-called enemies on social media while Putin, 69, has called critics of the invasion he is leading “traitors and scum.”

Even with this economic strain, Russian polls show that 70 per cent of people say they support what has been called a “special operation” to “denazify and

demilitarise” Ukraine. Some of those who were around during the Soviet Union still support Putin. 64-year-old Vladmir told The Times: “I grew up in the Soviet Union and we didn’t need all that western rubbish.”

“We can easily get by without it again. We’ll just tighten our belts for a while, if we need to,” he added.