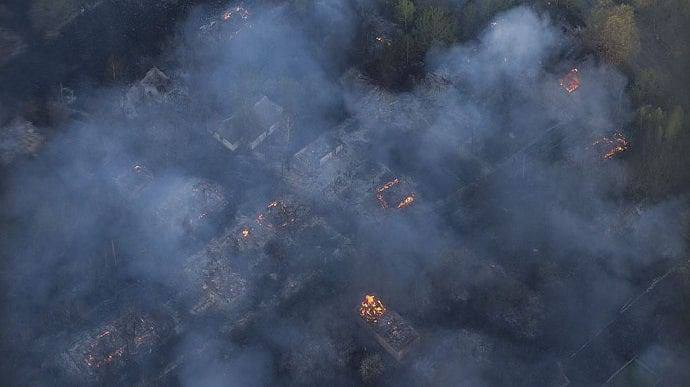 FOREST fires still burn within the exclusion zone around the Chernobyl Nuclear Power Plant, according to reports on Thursday, March 24.

The Verkhovna Rada, the unicameral parliament of Ukraine, said that seven fires had been reported near the power plant, according to satellite images from the European Space Agency’s (ESA) Sentinel-2.

Ukrainian media reported on March 23 that Russian forces allegedly refused to allow firefighters and rescue teams to enter the area in order to begin putting out the fires, which they probably caused.

“Probably, the fire broke out as a result of the armed aggression of the Russian Federation, namely the shelling or arson,” the Ukrainian parliament said.

The International Atomic Energy Agency (IAEA) was told by the Ukrainian parliament that firefighters had been trying to extinguish wildfires near Chornobyl Nuclear Power Plant on March 23 but were stopped by Russian forces, as concerns about increased radiation levels continued.

“Slight increases in caesium air concentrations had been detected in Kyiv and at two nuclear power plants, but they did not pose significant radiological concerns,” Director General Rafael Grossi said.

The Verkhovna Rada noted that there had been a deterioration of safety parameters and the state of the radiation situation at the nuclear plant, as “Putin’s army continues to grossly violate the requirements of radiation safety and sanitation at the plant and in the exclusion zone.”

Experts note that according to the Classification of Emergencies, the criteria for fire in the exclusion zone should not exceed 0.05-0.2 sq. Km, but the current state of the area of ​​fires exceeds these figures dozens of times, as reported by Ukrainian news outlet TSN.

“In terms of radiation risks recorded by the Automated Radiation Control System (ACMS) at 39 points, existing fires in areas with significant levels of radionuclide contamination and at the location of radioactive waste management infrastructure within 10 km of Chernobyl pose a threat,” a Verkhovna Rada statement read.

LeRoy Westerling, an expert in wildfires at the University of California, said the situation in Ukraine is complicated because “in the context of a war there are a lot of unusual ignition sources.”

“Burning around Chernobyl is a concern because the burning may mobilize radioactive particles that were deposited decades ago when the reactors melted down,” he added, as reported by the Guardian.

The battle for Chernobyl has been a prominent fixture during the war in Ukraine, which began on February 24 when Russian troops invaded the country.

Since then, Russian forces have tried to gain control over several notable nuclear sites in Ukraine, with varied success – Chernobyl being one of those successes.

However, on March 20, workers reportedly being kept prisoner at Chernobyl were finally released.

As noted by the Verkhovna Rada, 46 volunteers of the station went to replace the evacuated personnel of the Chernobyl NPP to perform their duties and to ensure the plant functioned properly.

“Our workers returned to their families on the evening of March 20. They are exhausted by such an incredibly long change – instead of 12 hours, they worked more than 600. It is a truly heroic act – to perform their duties continuously and unmistakably during such a long period. I am proud of them!” said the Acting Director-General of Chernobyl, Valery Seida

“I would also like to express my gratitude and respect to the Chernobyl staff who went to the station to replace our boys and girls! Such an act requires a lot of courage and dedication to their work.”