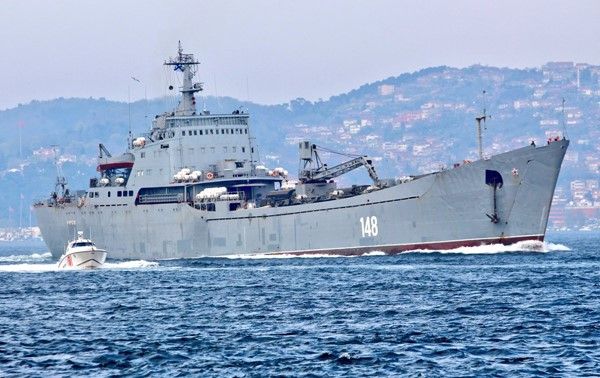 Ukraine’s navy has struck a fatal blow to Russia’s invasion today March 24th, as they sink the Orsk a supply ship and landing vessel that was to deliver armoured vehicles and equipment to forces on the frontline.

The Orsk, which Russian state TV had reported would be the first ship to enter the port of Berdyansk, was to be used to replenish the armaments of Russian troops. However pictures and video on social media show the ship on fire and sinking along with its cargo.

Initial reports were of hearing explosions in the port, since when Ukraine have also claimed the sinking of two further vessels on the same day, including a 3,000 tonne fuel tanker which caused a fire that spread to and destroyed significant ammunition supplies.

The news comes on the same day that Kyiv reported that it had pushed back Russian troops retaking some areas.

🇷🇺⚡🇺🇦 The Orsk, a large #Russian landing ship docked at the Ukrainian port of Berdyansk, has been destroyed in an attack by Ukrainian forces.#Russia #Ukraine️ #UkraineRussianWar pic.twitter.com/aWAmvcgQt6

Elsewhere the war continues unabated with Russian forces resorting to illegal tactics according to local and international sources. In the northern city of Chernihiv local government officials say a “catastrophe” is unfolding as Russian troops deliberately target sites where food is being stored.

City council secretary Olexander Lomako estimated that more than 130,000 people remain in the city, which had a pre-war population of 285,000, but that Ukraine remains in full control.

“Our generation follows their example. We defend ourselves, whatever it costs us. And we will keep standing. I want the whole world to know.”

The loss of the Orsk will be a significant blow to Russia’s invading forces who have faced fierce opposition. The sinking of the vessel in the port will also hamper any further landing attempts as fires rage and shipping channels become clogged.