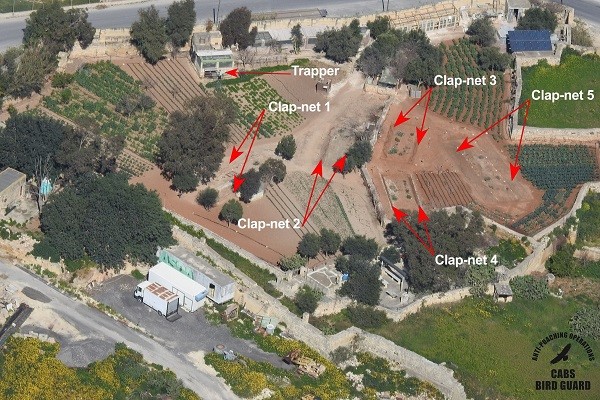 The Committee Against Bird Slaughter (CABS) have accused  governments of putting votes ahead of migrating birds, appeasing hunters by allowing the continued trapping.

But not to be deterred the CABS teams on Malta and Gozo, together with the police, were able to uncover no less than six cases of illegal bird trapping and convict the perpetrators. In order to catch greenfinches, linnets and other finches, the men used huge clap-nets and cages with numerous live decoy birds to lure migrating finches. The sites were found in Mtahleb, Mqabba, Gharghur, Munxar, Dingli and Delimara. CABS also released an aerial picture of a trapping installation found in Mqabba which was equipped with 5 pairs of clap nets operated from a single hide making it the single largest illegal bird trapping site ever found by CABS on Malta. “It is clear that this massive site was constructed to catch hundreds of birds per week and to generate large financial profits”, CABS Wildlife Crime Officer Fiona Burrows said adding that one bird can be sold for over a 100 Euros on the black market.

CABS said that its teams use covert surveillance to document and record the illegal activity and to direct officers from the Environmental Protection Unit (EPU) to the trapping sites. These latest finds bring the total number of illegal bird trapping sites reported by CABS to the authorities since the beginning of March to 41. During the operations, nets and trapping equipment with a value of several thousand euros and around 100 live finches were confiscated. All birds were immediately released back into the wild. The poachers identified by the police will soon be brought to court and face heavy fines. The operation, in which a total of 22 volunteers from Germany, England, Spain and Malta are participating, will last until the end of April.

The NGO today also sharply condemned the government´s plans to lift the spring hunting moratorium for turtle dove and to create a loophole in the law which will allow poachers to falsely legitamise taxidermy trophies of illegally obtained protected birds by using old registration documents to launder freshly killed specimens. “If this quasi-amnesty will be realised, Prime Minister Robert Abela and his party will once again become accomplices of selfish poachers who stole rare birds from nature and can now enjoy the fruits of their criminal activity with impunity”, CABS Press Officer Axel Hirschfeld said. “This will further contribute to Malta´s international reputation as a ´poacher-state´ whose irresponsible politicians are actively supporting the destruction of Europe´s biodiversity to secure votes in the upcoming election“.

Malta is not the only government that has been accused of putting votes before migrating birds, with similar battles being fought by CABS elsewhere in the Mediterranean.