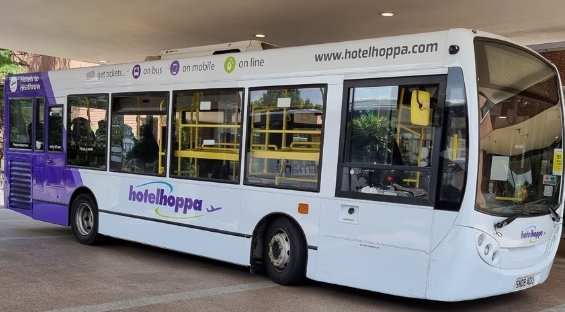 By comparison a flight from Heathrow to Alicante will cost you as little as seven pence per mile (six cents per kilometre). Transport for London (TfL)’s Hopper bus fare increased from £1.55 to £1.65 at the start of this month, which is still reasonable given the rise in fuel prices. However the same restrictions on Transport for London fares set by the City of London, do not apply to non-TfL bus routes where there is no limit on the maximum passenger fare.

The Heathrow Hotel Hoppa is a series of seven shuttle bus routes which link Heathrow Airport’s terminals 2, 3, 4 and 5 with 34 different hotels on the outskirts of the airport. The door-to-door service, some hotels are not served directly, charges premium fares with Heathrow having stopped subsidising the service after suffering massive losses due to the pandemic.

There is a difference though, the Hotel Hoppa is a bespoke service rather than a standard bus service but it is questionable whether the price difference is justifiable. The service is also far more infrequent begging the question why it is even required, as the hotels and terminals are well served by the TFL service.

With Oyster and Travelcards not accepted on the service it is likely that those who are paying over the odds are infrequent users of public transport, or are not Londoners that are being discretely ripped off.

The cost of the Hoppa service is just one example of how airports and associated services are “milking” passengers, with many airports now charging £5 or more to simply drop off those catching flights. Prices of goods and services in the airports are similarly overpriced, often up to 60 percent more expensive.

The government have oft repeated the mantra global Britain, but if the rip-off pricing at airports is allowed to continue unabated there will come a time when it becomes a deterrent to air travel.