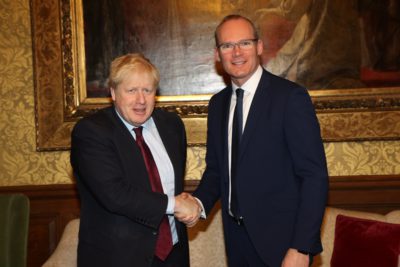 Reuters reported that a suspect device was discovered in a hijacked van in the car park of the community centre venue in North Belfast.

The Belfast Telegraph reported that a van was hijacked in the city with the driver being forced to drive close to the venue.

The driver of the vehicle alerted security officials to the presence of the device.

Police officers put a 400 metre exclusion zone in place and an army team was called in.

Mr Coveney was five minutes into his address when he was ordered to leave the stage by his security detail, it was reported.

Attendees evacuated the premises by a rear entrance.

A controlled explosion of the suspect device was reportedly carried out by the army.

“I spoke to the poor man whose van was hijacked … He’s lost his memory. He’s traumatised. It’s just unreal,” Father Aidan O’Kane, the manager of the Houben Centre where the event was being held, told Reuters.

A funeral in the adjacent church also had to be evacuated, O’Kane said.

Mr Coveney posted on Twitter that he was: “saddened & frustrated that someone has been attacked & victimised in this way and my thoughts are with him & his family.”

Mr Coveney was giving an address as part of the Time to Build The Common Ground by the John and Pat Hume Foundation at the Houben Centre on the Crumlin Road.

John Hume was leader of the Social Democratic and Labour Party (SDLP), representing the people of Foyle as their Member of Parliament from 1983 to 2005.

His wife and partner, Pat, ran his constituency office from the early days of the Civil Rights Movement, through the darkest days of the troubles, and the Good Friday Agreement of 1998 — of which John was a chief architect — until John retired in 2005.