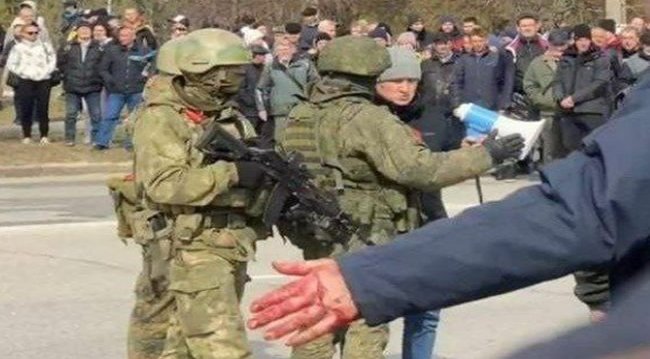 The Ukrainian town of Slavutych was recently reportedly taken over by invading Russian soldiers. They subsequently took the town’s mayor Yuri Fomichev prisoner. The population of around 25,000 were not content to let the military take control so allegedly staged a protest in the town’s square.

Located just outside the new ‘exclusion zone’ around Chernobyl, thanks to the protests, Slavutych is today free of the Russian occupying forces, according to reports.

Speaking about the protest, Oleksandr Pavlyuk, a governor of the Kyiv region in which Slavutych sits, said that “The Russians opened fire into the air. They threw flash-bang grenades into the crowd. But the residents did not disperse, on the contrary, more of them showed up”.

Refusing to be intimidated by the Russian troops, the large group of unarmed residents apparently demanded their town’s mayor be set free. It appears that whoever was in command of the Russian troops made an agreement with Yuri Fomichev that as long as all Ukrainian military personnel were to leave the town then they would set him free and leave the town.

Fomichev addressed the townsfolk and explained that the Russians would do a search of the town for any Ukrainian soldiers, and once they were satisfied, they would leave. That is exactly what happened, the Russians eventually departed, and the mayor was free, but with a Russian checkpoint set up outside the town.

This incident goes to show the struggle that Putin’s military is facing in Ukraine. Even after taking the town, the residents refused to accept being under Russian control, and clearly, the commander at this time realised the situation was beyond his control, as reported by news.yahoo.com.

Residents of the occupied #Slavutych came to the main square with a huge #Ukrainian flag.🇺🇦🇷🇺#UkraineWar #Ukraine #Russia #StandWithUkraine️ pic.twitter.com/zTqj1X7fXl