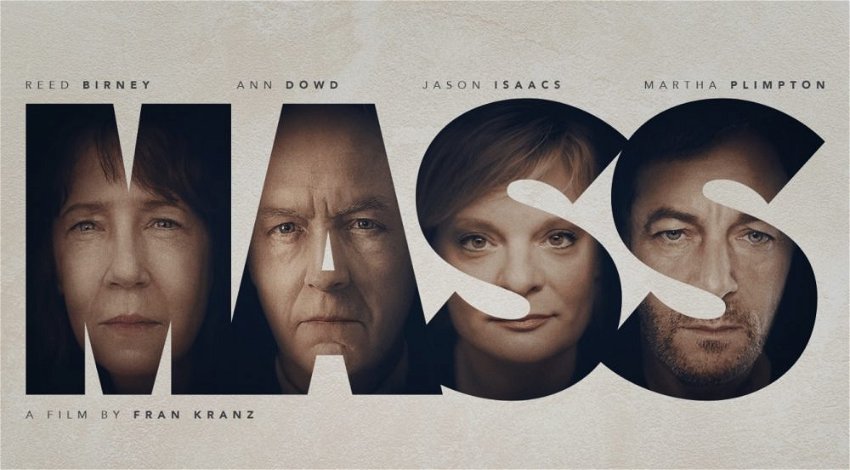 Mass, released late last year and now available to stream on Hulu, is a sensitive and emotional look at the aftermath of a mass shooting at a school in America.

Mass requires a lot from its audience. This movie is shot, for the most part, in one room and with four actors. This intimate and simple location lets the dialogue and acting really shine, emotions run high and it is easy for the audience to forget they are actually watching a film. Mass has an impressive 95 per cent critic rating and a 91 per cent audience rating on Rotten Tomatoes, making it highly recommended.

Two couples meet at an Episcopalian church, where the thoughtful script unfolds. We learn that one of the couples are the parents of a school shooter and the other couple are the parents of one of the victims. The four-character piece includes a powerhouse of actors such as Ann Dowd (The Handmaids Tale), Jason Isaacs (Harry Potter), Martha Plimpton (The Good Wife), and Reed Birney (House of Cards).

The script forces the audience to consider the parents left behind after such tragedies – particularly the parents of the perpetrator – who, in this case, was a depressed and lonely young man. The unspeakable is confronted in these four walls, which gives the feeling of a stage play or live TV drama.

The parents of the shooter, Linda and Richard (Dowd and Birney), emotionally confront the actions of their son, reminding the others that this is a complicated and multifaceted situation. Something that struck me was the question of whether people are born ‘bad’ or whether it is something that is learnt – this is a question that is considered during the film.

It is also interesting to note how Richard describes the aftermath for them, being excluded from memorials, concerts and the funerals of the victims. A poignant message conveyed is that they felt they had no right to mourn and that they were not only dealing with the grief of their son Aiden, who killed himself in the school library, and the 10 other victims but also the guilt of what Aiden had done.

There is no political discussion here, something that is essential to address when looking at the issue of American gun laws and the huge amounts of school shootings in the country. This movie focuses on the aftermath and intensity of emotions after this type of tragedy.

Mass is now available to stream on Hulu.