Was Will Smith right to slap Chris Rock? 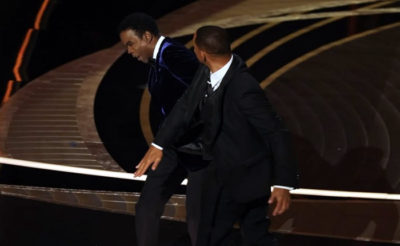 Live on stage at the Oscars, film star Will Smith got out of his seat, strode on stage, and gave a slap to comedian Chris Rock’s face.

It was a pivotal moment in the 94th edition of the Oscars that riveted the audience, viewers worldwide, and social media channels lit up around the globe.

But was it right?

Intial reactions were that it was a carefully staged event.

However, the stunned silence in the auditorium was broken by Smith yelling angrily from his seat, ‘Keep my wife’s name out your f***ing mouth’.

His reactions, even for a consummate actor, appeared very real.

Smith´s actions came after the comedian made a joke about his wife Jada Pinkett Smith’s shaved head as he presented the Academy Award for best documentary.

When Rock quipped: “Jada I love you, ‘G.I. Jane 2,’ can’t wait to see it,” the camera cut to Pinkett Smith, who rolled her eyes.

She has been open about her struggle with alopecia, an autoimmune disorder that leads to hair loss.

While Smith’s actions have been widely condemned on social media, with many arguing he should be charged with assault, his 23-year-old son, Jaden Smith, shared a tweet , which said: “And That’s How We Do It.”

Now it seems the incident has been confirmed as real as CNN reported that Chris Rock will not be pressing charges, citing the Los Angeles Police Department.

Will Smith appeared remorseful when he returned to the stage shortly after the memorable slap when he accepted the Oscar for best actor for his role as Richard Williams, the father of Venus and Serena Williams, in the film “King Richard.”

In an emotional speech, Smith apologised to the Academy and his fellow nominees for the incident but, notably, did not mention Rock by name.