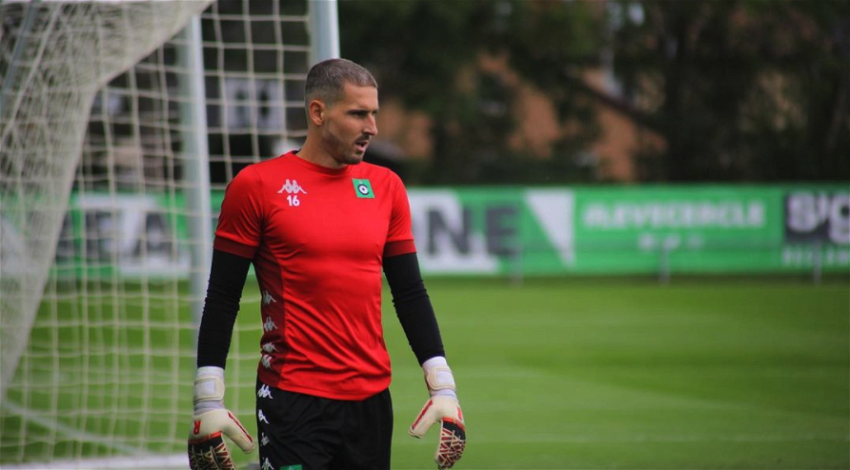 BELGIAN footballer Miguel van Damme, who played for Cercle Brugge, has died aged 28, according to his family on Tuesday, March 29. Tributes have flooded social media for the goalkeeper.

van Damme has lost his battle with Leukaemia, as reported by his wife via Instagram on March 29.

The goalkeeper was first diagnosed with cancer ahead of the 2016-17 season and battled it bravely for over five years, seemingly beating the blood disease on two separate occasions before his announcement in September 2020 that it had returned and was incurable, as reported by the Daily Mail.

van Damme leaves behind his partner, Kyana Dobbelaere, and a young daughter.

Dobbelaere paid a touching tribute to the father of her daughter, writing on Instagram: “Our dearest darling, daddy left for his last match last night, a match that can no longer be won.

“You left us very slowly, yet you did it again in your own way… very strong.

“You fought like a lion. We are so thankful for who you were. An example for many.

“You have made me realise that there is no such thing as giving up, even if there was only that one small glimmer of success, time and again you got over it.

“Rest now darling, you have more than earned it, you are now freed from all pain. We would love to see you.

“Big hug from your two girls. See you later.”

Cercle Brugge, who are currently 10th in the Belgian Pro League, released a statement after learning of the player’s death.

“It is with great sadness that we report that our friend and teammate Miguel Van Damme has fought his long and unfair battle against leukaemia,” it read.

“Words are not enough to describe what we feel, even though we knew that things had not gone well for a while.

“Today is an extremely difficult day in the almost 123-year history of Cercle Brugge.

“Our thoughts go in the first place to his wife Kyana, his daughter Camille, Miguel’s parents, his sister Francesca but also to his many friends and family.

“Miguel, your perseverance and strength to go for it (again) over and over, setback after setback, was admirable.

“You are an example of positivism, persistence and fighting spirit. A source of inspiration for everyone who fights.

A statement from the league read: “After an uneven battle with leukaemia, Miguel Van Damme died at the age of 28. Our thoughts are with his family, friends and everyone at Cercle Brugge. Your fighting spirit has been inspiring. Rest in peace.”

Teams from all over Belgium paid tribute to the footballer via social media.

FC Gent wrote: “Together with the entire Belgian football world, we mourn the loss of Miguel today. Our blue and white family wishes the family and friends of Miguel Van Damme and everyone at @cercleofficial a lot of strength on this sad day. RIP.”

“It is with great sadness that we learn of Miguel Van Damme’s passing. We wish all relatives a lot of strength in these difficult times,” said KV Oostende.

Oud-Heverlee Leuven wrote: “Miguel Van Damme sadly passed away last night. We want to wish his family and friends a lot of strength.”

The death of the young footballer follows the tragic death of another Belgian sports star.

On March 14, Belgian cyclist Cedric Baekeland died of a heart attack at the age of 28 during a training camp in Mallorca, Spain.

Baekeland and his teammates were preparing for the start of the Belgian cycling season, which began on March 26 in Slypskapelle, Belgium.