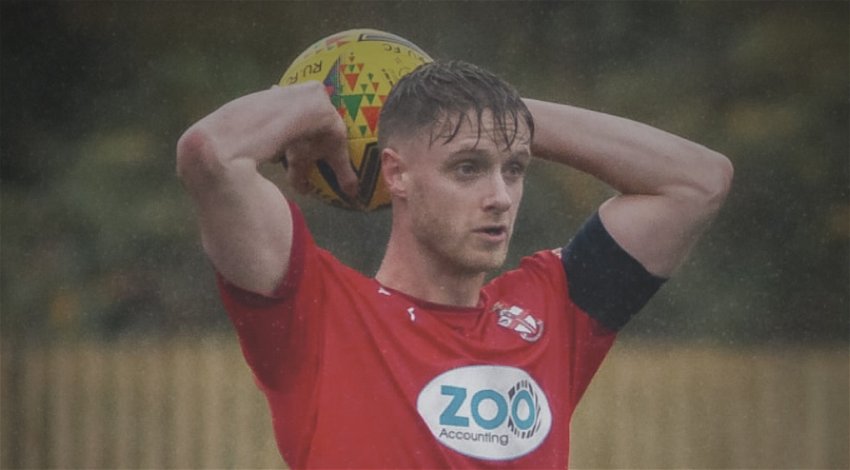 Non-league footballer Tom Rankin dies aged 26 and tributes have continued to be paid to the star following his ‘sudden and unexpected’ death.

TRIBUTES have continued to be paid to British non-league footballer Thomas ‘Tom’ Rankin who died ‘suddenly and unexpectedly’ aged 26. Following a conversation with ‘Ranks’ father, the club’s chairman wrote: “It’s okay to not be okay.”

The young footballer was reportedly named among the substitutes for Redditch United’s Southern League Premier Division Central clash against Rushden & Diamonds on March 26, which they lost 3-1.

However, on Sunday, March 27, just 24 hours after the game, the club announced he had passed away.

The club’s chairman David Faulkner said on Facebook that he was devastated by the news, using the hashtag #itsokaytonotbeokay after speaking to the player’s father.

“Our Reds lost a member of the family today. It hurts. An amazing young man from an amazing family. I’m devastated.

“I met with Tom’s Dad’s earlier. As we parted, he told me to go home and give my boys a hug. So humble.

“His words I will heed. Please give your loved ones a hug, make sure they are ok. Time is the greatest gift. RIP Tom.”

A statement from the club read: “Redditch United are devastated to hear of the passing of midfielder Thomas Rankin.

“Tom has been with the Reds for the past three seasons and his loss will be felt by all at the Club.

“Our thoughts are with his family at this time. RIP Tom.”

Redditch United are devastated to hear of passing of midfielder Thomas Rankin.

Tom has been with the Reds for the past three seasons and his loss will be felt by all at the Club. Our thoughts are with his family at this time.

A cause of death is yet to be confirmed, as reported by the Mirror, who said the death was ‘sudden and unexpected’.

Rankin’s parents wrote on Facebook: “Tom you are the best son, you have always made us so proud, you are our world.

“There are no words for how much we will miss you. You have achieved so much in your short life.

“We would give everything to have you back with us. Rest in Peace with all our love Mom and Dad,” as reported by Birmingham Live.

Redditch United manager Matt Clarke tweeted: “Life is so precious people. We often take things for granted I know I do.

“In reality certain things really aren’t that important in the grand scheme of things.

“A special person left us today and words cannot describe how special this lad was.”

Life is so precious people. We often take things for granted i know I do. In reality certain things really aren’t that important in the grand scheme of things. A special person left us today and words cannot describe how special this lad was. 💙💙🙏🏾🙏🏾

Walsall Wood FC wrote on March 29: “Our condolences go out to Tom Rankin’s family, friends and football family, he played against the Wood several times over the years while playing for Bromsgrove and Loughborough Uni.”

The club noted that one of their players “knew Tom on a personal level and [said] he was a great lad and will be sadly missed!”

American side Carson-Newman Eagles noted that they had received word of their former player’s death.

“A three-year player with the Reds of Redditch United, Rankin played at Carson-Newman in 2017 and 2018.

“Rankin appeared in 25 games in his two seasons on the banks of Mossy Creek, scoring a goal against Queens in 2017 and another against North Greenville in 2018.

“Affectionately known as Ranks, he is survived by his parents, Wendy and Bob.

“Carson-Newman’s men’s soccer team will sport shirts in his honour when it takes the field on Friday in a spring scrimmage against Cumberland,” the statement concluded.

“He was a top player, but more importantly he was a top man. Our thoughts go out to his family, his friends and his teammates, both past and present.”

All our love to former @CNmenssoccer player and @RedditchUtd midfielder Tom Rankin who passed away over the weekend.

AFC Rushden & Diamonds tweeted at the time: “Having been with you all yesterday, We are devastated to read this awful news this afternoon.

“Our thoughts are with you all and with Tom’s friends & family.”

One of Rankin’s former clubs, Leamington FC, wrote: “Our sincerest condolences to everybody at Redditch and to Tom’s friends and family. He played for us briefly upon our return to the National League North five years ago. A truly sad loss. Thoughts are with all who knew him.”

One fan on Twitter said: “Still hasn’t sunk in – what a huge, huge loss to all those who had the pleasure of knowing Tom Rankin. The word legend gets chucked around but it described TR perfectly. RIP my mate.”

Another fan wrote on Facebook: “Football is not even relevant at the moment. I had the pleasure of meeting Tom and what a fine human being he was. A hell of a player and an even better person. Thoughts are with his family and friends and the Redditch United community, from staff to players to the fans.”

We are devastated to hear of the passing of @RedditchUtd’s Tom Rankin. Tom played a few games for the Swifts when he was coming back to full fitness a few years ago and he was a great lad. May he rest in peace. 💛🖤 pic.twitter.com/hdY3B86q3i

We are hugely saddened by the untimely passing of Tom Rankin.

Our thoughts are with his family at this time.

He made 14 appearances, 5 as a sub, and scored 1 goal. pic.twitter.com/WtcjeIKm6D

In January 2022, another former non-league footballer died while playing football in the United Arab Emirates.

36-year-old Brit Alfie Nunn reportedly died after suffering a heart attack while playing football on January 27, the Sun reported at the time.

Nunn, who played for a number of clubs in southeast London and Kent, including Croydon FC, Canterbury City, Beckenham Town, and Fisher FC – who released a statement following news of his death.

In a statement at the time, the club said: “We have been informed that former Fish midfielder Alfie Nunn, who featured regularly during the 2015/16 season, has passed away after suffering a heart attack while playing in Dubai.

“Our thoughts are with Alfie’s family and friends at this sad time.”

Earlier this month, two young footballers passed away after collapsing on the football pitch.

Promising young footballer Debojyoti Ghosh died of a heart attack after collapsing unconscious on the pitch during a local tournament game on Saturday, March 19.

Ghosh, who had earned a move from Calcutta Football League outfit Railway FC to Kolkata-giants East Bengal FC for the start of the 2022-23 season, was immediately rushed to a local hospital following the collapse.

However, he was in critical condition so he was transported to the Nadia district hospital in Krishnagar, where he was declared dead upon arrival following a cardiac arrest, as reported by india.com.

Then on March 20, 22-year-old Michel Almanza died following a heart attack after he collapsed in the middle of a football league match in Uruguay.

As reported by El Pais, teammates of the footballer along with the ground’s owner tried to help the young man, who was reportedly convulsing on the pitch.

A few minutes later, an ambulance arrived and Almanza was taken to the Sanatorio Cantegril hospital, where he arrived alive, as reported by Telemundo.

However, after being admitted to the cardiac ICU, he suffered a cardiac arrest and died a few hours later.