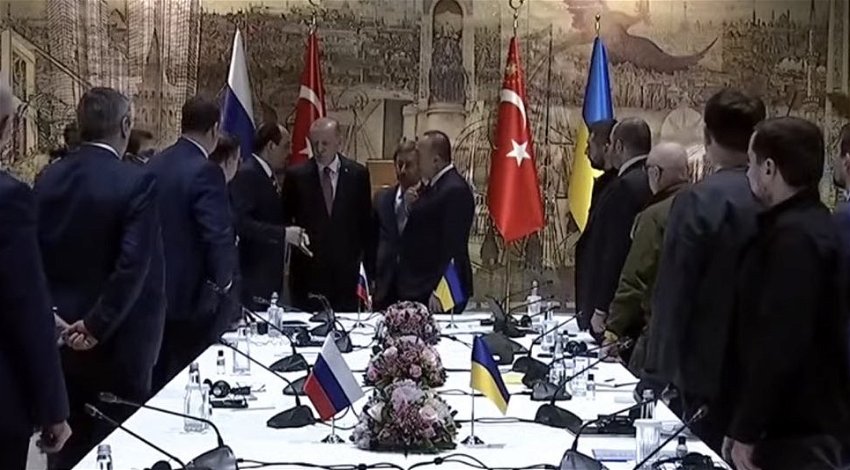 Russia pledges to ‘radically’ reduce fighting around Kyiv during the latest peace negotiations.

DELEGATES from Russia and Ukraine met in Turkey on Tuesday, March 29 for another round of face-to-face peace negotiations and as a result, Russia has reportedly pledged to drastically reduce fighting around Kyiv.

The pledge from Putin’s government comes after Ukraine proposed neutral status with guarantees to protect it from attack.

The Ukrainian government had allegedly already accepted neutrality in Kyiv as it has reportedly given up trying to join NATO, however, these latest rounds of talks confirm that although neutrality may have been accepted, Ukraine wants to add some guarantees.

“Given that the talks on the preparation of an agreement on the neutrality and non-nuclear status of Ukraine have moved into a practical field … a decision has been made to radically, by several times, reduce the military activity in the areas of Kyiv and Chernihiv,” Russian Deputy Defense Minister Alexander Fomin said on March 29.

He suggested the security treaty would involve an “enhanced analogue” of NATO’s Article 5, which will see guarantor countries including the US, UK, Turkey, France and Germany “legally actively involved in protecting Ukraine from any aggression”.

Podolyak and fellow Ukrainian negotiator Oleksander Chaly told reporters in Turkey that any proposal would include a 15-year consultation period on the status of Russian-annexed Crimea, and could “come into force only in the event of a complete ceasefire,” as reported by the New York Post.

Sky News noted that details coming out of the negotiations on March 29 offer a glimmer of hope that a ceasefire can be established after previous negotiations had proven unsuccessful.

However, the announcement was met with angry comments on Twitter.

One person wrote: “And who will rebuild Ukraine? Where is the reparation? What the f*ck is neutrality? This 30-year neutrality is now killing us with thousands of Ukrainians, bombs and rockets. Guarantors, f*ck. Already under the Budapest Treaty, we have guaranteed that we are spitting blood from their guarantees.”

“This sounds terrible. There is no way Ukrainians will agree to that. Neutrality means the end of Ukraine,” another person said.

Another person wrote: “It basically sounds like a unilateral version of NATO’s Article 5, meaning that an attack on Ukraine triggers a full NATO response, but Ukraine is not obligated to defend other NATO member states. In other words, it’s a face-saving (for Putin) version of NATO membership for Ukraine.”