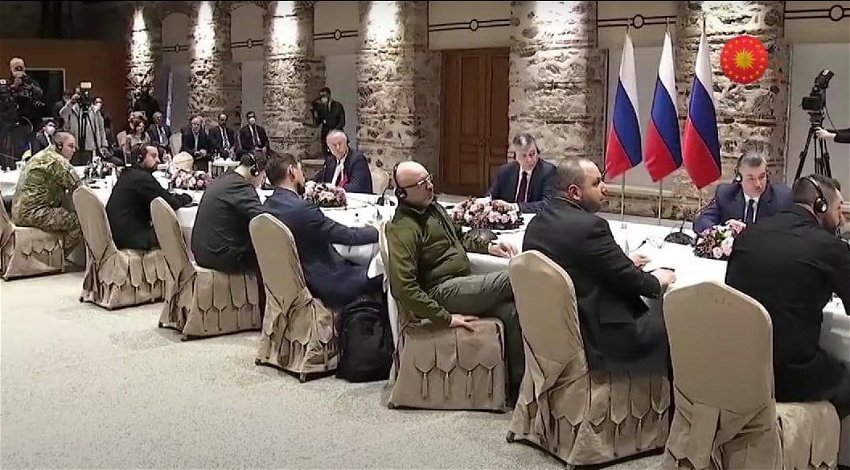 Russia and Ukraine start a fresh round of face-to-face negotiations in Turkey.

DELEGATES from Russia and Ukraine have arrived in Turkey on Tuesday, March 29 to start a fresh round of face-to-face negotiations as people around the world hope for an end to violence.

Amid heavy security, delegates arrived an hour early at the venue where they are scheduled to hold these two-day face-to-face talks – the first in more than two weeks – at the Presidential Office of the Dolmabahçe Palace in Istanbul.

Turkish President Tayyip Erdogan insisted that talks on March 29 need to yield “concrete results” with regards to a ceasefire.

Mr Erdogan said: “At such a critical time we are pleased to welcome you and to contribute to your efforts to establish peace.

“I wish that our meetings and discussions will prove to be auspicious for your countries, our region and all humankind.”

Since the invasion began, Putin has been clear on what it will take to end his invasion of Ukraine:

These points, as reported by 20minutos, are the sticking points that will be discussed by the delegates from Russia and Ukraine on March 29. Although, further reports suggest that the ‘denazified’ part of Russian demands has been dropped.

According to the Financial Times who have spoken with four people briefed on the ongoing talks, that red line has been dropped and the country would drop its opposition to Kyiv joining the EU if it abandoned efforts to join NATO.

However, according to those same sources, Russia keeps moving the goalposts changing both its military pressure and demands almost daily.

The Ukrainian government has already accepted neutrality in Kyiv as it has reportedly given up trying to join NATO, however, it has also made it clear that it will not negotiate anything ‘that has to do with the territorial integrity of the country’ and that any agreement between the delegations will have to be submitted to a referendum.

This means Ukraine’s President Volodymyr Zelenskyy does not want to recognise either the independence of Donbas or that Crimea is part of Russia. He has also stated that any pact between the two countries may not be final.