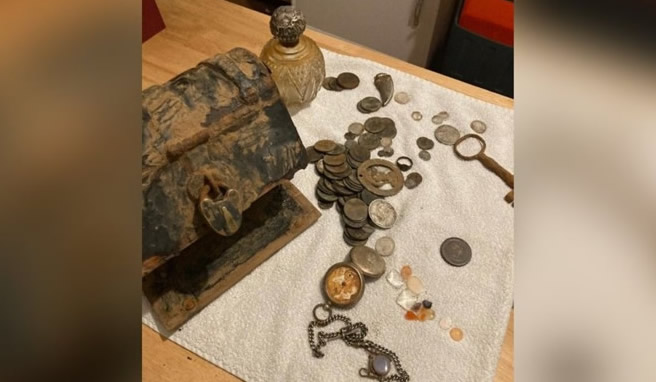 Jennie Fitzgerald, a 38-year-old medical secretary at the Norfolk and Norwich University Hospital, has revealed how she made what could be a life-changing discovery on March 20.

While taking part in a beach clearing event between Cart Gap and Happisburgh, she uncovered a real, authentic, wooden treasure chest.

The amazing find came as Mrs Fitzgerald was about ready to leave the beach after her day spent clearing the sand. Spotting a piece of wood that “had an unusual shape to it”, she went to take a closer look. “As I moved over to it I realised it was quite firmly in the sand”, she remarked.

“I noticed it had this brass lock on it and it was a treasure chest”. As it had “VR and a little crown” on the lock, she said she guessed it could be from Victorian times.

Mr Fitzgerald quickly joined her at the beach after receiving a phone call from his excited wife. They took the chest back to the caravan they were staying in with their children at the time. “I said ‘look everyone – mum found a treasure chest!'”.

Between them, they proceeded to try and open the sand-encrusted chest, finally managing to lever it open. “Coins started dropping out, then the gems and the pocket watch”, Mrs Fitzgerald exclaimed. “The last thing to come out was a big perfume bottle. I was in shock, I was just sitting there staring at everyone”, she added.

“It’s been a crazy time, I’m still in shock”, she said, explaining that she had contacted the liaison officer at her local council offices to clarify who actually owns her treasure chest and its contents. He told Mrs Fitzgerald he was going to have the contents assessed and “trace and work out who the chest belonged to”, as reported by bbc.com.