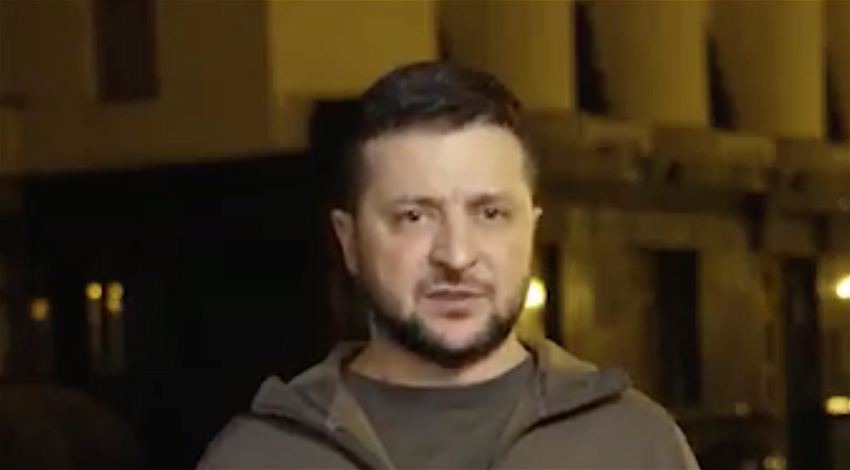 UKRAINE’S President Volodymyr Zelenskyy warns that promise from Russia that Putin’s troops will ‘radically’ reduce fighting around Kyiv cannot be trusted and that the country must “not lose vigilance”.

Addressing his people on Wednesday, March 30, the actor-turned-politician spoke about the progress made during face-to-face peace negotiations in Turkey between Ukraine and Russia, warning that although progress was made “[this does] not silence the explosion of Russian shells [in our country].”

“We should not lose vigilance,” he said. “The situation has not become easier. The scale of the challenges has not diminished. The Russian army still has significant potential to continue attacks against our state.

“Yes, we can call the signals we hear from the negotiating platform positive. But these signals do not silence the explosion of Russian shells. Of course, we see all the risks. Of course, we see no reason to trust the words of certain representatives of a state that continues to fight for our destruction. Ukrainians are not naïve people. Ukrainians have already learned during these 34 days of invasion and over the past eight years of the war in Donbas that only a concrete result can be trusted.”

Russian shelling has reportedly struck Kyiv in the early hours of March 30, with Ukrainian media outlets reporting explosions and air raid sirens sounding in the capital.

Paul Ronzheimerm, reporting from Kyiv for German news website Bild, tweeted: “A lot of shelling in Kyiv tonight just hours after Russian side announced they would focus more on Donbas.”

Speaking about whether Ukraine will continue to negotiate with Russia, the 44-year-old said: “Of course, Ukraine is willing to negotiate and will continue the negotiation process. To the extent that really depends on us. We expect to get the result. There must be real security for us, for our state, for sovereignty, for our people. Russian troops must leave the occupied territories. Ukraine’s sovereignty and territorial integrity must be guaranteed. There can be no compromise on sovereignty and our territorial integrity. And there will not be any.

“These are clear principles. This is a clear vision of the possible outcome. And to those on social networks who perceive words as if they are facts already, I want to remind one thing: we live in a democratic state and fight for our freedom. For freedom for our people.

“Therefore, any decisions that are important for all our people must be made not by one person or a group of people with any political views, but by all our people. The wise people of Ukraine.

“And certain countries should not even expect that certain negotiations will facilitate the lifting of sanctions against the Russian Federation. The question of sanctions cannot even be raised until the war is over, until we get back what’s ours and until we restore justice.

“On the contrary, sanctions must be strengthened. Intensified weekly. And they must be effective. Not just for headlines in the media that sanctions have been imposed, but for real peace. Real,” he concluded.

On March 29, delegates from Russia and Ukraine met in Turkey for another round of face-to-face peace talks where Russia reportedly pledged to drastically reduce fighting around Kyiv after Ukraine proposed neutral status with guarantees to protect it from attack.

The Ukrainian government had allegedly already accepted neutrality in Kyiv as it has reportedly given up trying to join NATO, however, talks on March 29 confirmed that although neutrality may have been accepted, Ukraine wanted to add some guarantees.

“Given that the talks on the preparation of an agreement on the neutrality and non-nuclear status of Ukraine have moved into a practical field … a decision has been made to radically, by several times, reduce the military activity in the areas of Kyiv and Chernihiv,” Russian Deputy Defense Minister Alexander Fomin said on March 29.

He suggested the security treaty would involve an “enhanced analogue” of NATO’s Article 5, which will see guarantor countries including the US, UK, Turkey, France and Germany “legally actively involved in protecting Ukraine from any aggression”.