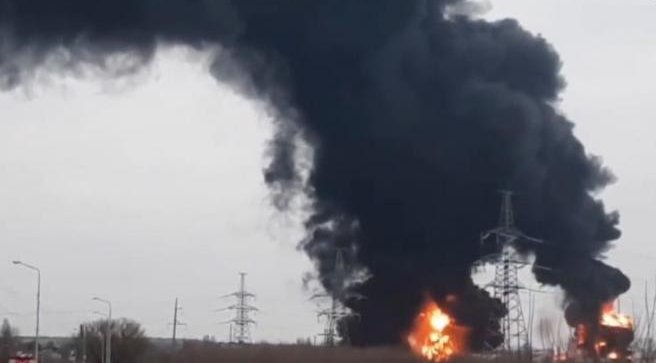 The Russian State News Agency (TASS) claims that on April 1 Ukraine forces have for the first time attacked targets in Russia, with a fuel depot in the town of Belgorod hit.

The Regional Governor Viacheslav Gladkov made the accusations saying that the Ukrainian Army attacked a fuel depot in the town which is located near the border between the two countries. He added that the depot was damaged but that no casualties had been reported.

A message on his Telegram account said: “The fire in a fuel warehouse took place due to a bombardment by two helicopters of the Armed Forces of Ukraine, which entered Russian territory at a low altitude.”

Video reportedly of the two Ukrainian Mi-24 helicopters that took part in the attack on the oil facility in Belgorod. https://t.co/Ue5sVJPPZ8 pic.twitter.com/NRpEAHcc4B

The claims come as Russia says that it has changed tactics and will be concentrating on liberating the Donbas region, claims that have been disputed by western intelligence who say they can see no signs of a Russian withdrawal from areas around Kiev.

Ukrainian forces have had some success in repelling Russian forces retaking the villages of Sloboda and Lukashivka, which sit to the south of Chernihiv, and have continued to make successful but limited counter attacks to the east and north east of Kyiv. Chernobyl has also been retaken by Ukrainian forces after a retreat by Russian troops.

The assault on Mariupol has continued unabated according to the General Staff of the Ukrainian armed forces, claiming that troops being transferred from Abkhazia , one of the self-proclaimed independent republics in Georgia, were being used.

Ukraine has yet to claim or confirm whether their forces attacked the Fuel depot on Russian soil , which would be a first with the country having concentrated on defending itself up until now. The claim also comes on the the same day of reports that Russia is looting humanitarian convoys.