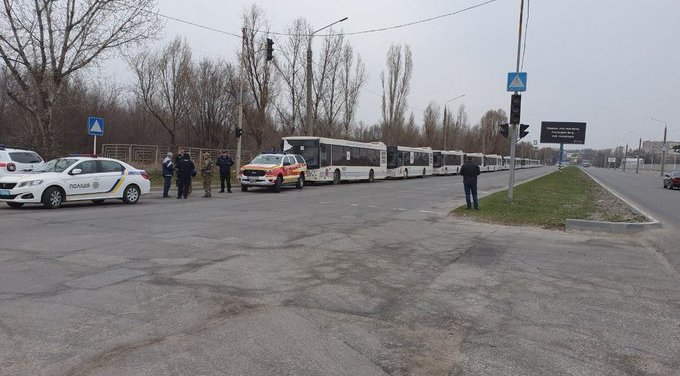 According to Iryna Vereshchuk, the Ukrainian Minister of Reintegration of temporarily occupied territories, Russian forces on Thursday March 31st confiscated 14 tonnes of humanitarian aid from buses bound for Melitopol in southern Ukraine.

She said that the food and medication was loaded on 12 buses that were stopped and raided. According to her a further 45 buses going to Berdiansk on the same day were also stopped from making their journey.

She added: “We are negotiating for the buses to be returned and for the Melitopol residents tomorrow to be allowed to evacuate using these buses.”

Information to hand suggests that around 1,458 people reached Zaporizhzhia in their own cars on Thursday, whilst 631 of them having escaped from Mariupol and 827 from Berdiansk, Enerhodar, Melitopol, Polohy, Huliapole and Vasylivka in the Zaporizhzhia region.

Mariupol City Council says a new evacuation convoy of 17 buses has left for Berdyansk to rescue more residents of besieged Mariupol. Authorities hope they'll be able to evacuate thousands of residents tomorrow in a column of some 45 total buses and also take in humanitarian aid. pic.twitter.com/0gqzxufyic

The Russian Defence Ministry had that they will open a humanitarian corridor from the southern city of Mariupol to Zaporizhzhia on April 1 at the request of the leaders of France and Germany.

The corridor is due to open from 10am Moscow time with Russian troops setting up an intermediate point in the southern city of Berdiansk. The corridor has however been criticised by France who say it is insufficient to allow the rescue of residents from Mariupol.

According to Vereshchuk about 100,000 civilians remained trapped in the city, which has suffered weeks of bombardment from Russian forces.

The International Committee of the Red Cross (ICRC), who is preparing to evacuate residents from Mariupol, said: “It is desperately important that this operation takes place. The lives of tens of thousands of people in Mariupol depend on it.”

Whether the humanitarian convoys will enjoy safe passage or be raided again remains to be seen with Russian forces seldom having stuck to agreed arrangements.