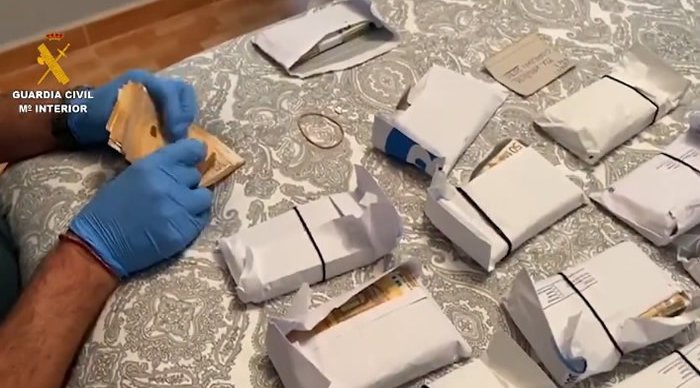 Guardia Civil dismantles a criminal gang passing gardenia off in Spain as saffron, in a €3 million scam

The Guardia Civil has arrested 11 people and in the process, dismantled a criminal group dedicated to the commercialisation of supposed saffron. Their ‘saffron’ turned out to be molecularly modified gardenia, imported from China. It is believed the gang accumulated a profit in excess of €3 million from this illicit operation.

As reported in a statement by the General Directorate of the Guardia Civil, ‘Operation Garden’ was carried out by officers from the Seprona unit. The 11 detainees are being investigated for crimes against public health (agri-food fraud), fraud against the market and consumers, and of belonging to a criminal group.

In the operation, which was carried out in Malaga, Barcelona, ​​Alicante, Granada, and Almeria, three companies were been investigated. These businesses were supposedly used to market the pulverised gardenia extract as if it were saffron, throughout the country.

The criminal group had developed a food fraud methodology almost undetectable by current techniques. It consisted of reducing the concentration of a molecule until it was almost eliminated, which is the only way to differentiate powdered saffron from gardenia.

Gardenia is a common garden flower that has a colour similar to saffron. Its acquisition costs are significantly lower since gardenia can be harvested intensively, while saffron must be done manually, due to the delicacy of the product. Therefore, the harvest price of saffron is 10 times higher than that of gardenia.

In the European Union, gardenia is not considered to be a food product. This means that those investigated imported its extract without meeting any safety standards, while also breaching European protocols regarding health and food quality.

Those investigated imported the different extracts of gardenia from a factory in China, dedicated to the production of dyes. They then passed their product off as saffron extract, changing the labels and technical and customs documentation, all at the request of Spanish companies.

Once the product was in the national territory, it was stored and handled according to the demands of the clients. It was introduced into the market through large distribution chains and consumed by the Spanish population who believed they were buying saffron.

Data on the marketing of this product showed that the gang had been dealing with China since 2013. As the purchase price of the gardenia was so low, a mark-up of 800 per cent was possible.  Investigators estimated that those investigated would have obtained a profit of more than €3 million.

During the operation, more than 2,000 kilos of alleged adulterated saffron were seized, valued at more than €750,000. It has since been withdrawn from the market, as reported by malagahoy.es.