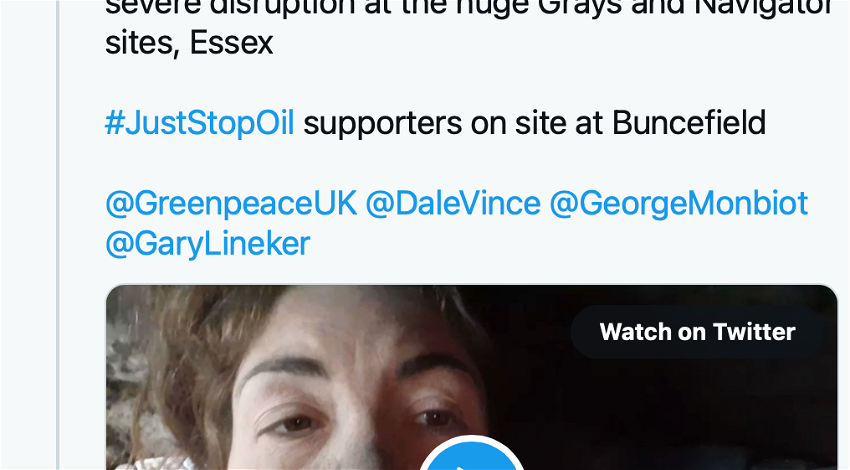 Police have arrested 275 people after a series of fuel protests across the UK.

Just Stop Oil and Extinction Rebellion activists, have been blocking access to oil terminals over the past four days, trying to get the Government to stop new oil and gas projects. The activists, have dug a tunnel network at the Navigator Oil terminal in Thurrock and Grays oil terminals in Essex, and around 30 protesters have returned to the Esso Oil facility near Heathrow Airport in west London following the arrests.

Andrew Smith, from Extinction Rebellion, stated “We’re here to say that climate action cannot wait. Right now, governments are choosing to exploit the crisis in Ukraine to hand out oil licences and continue the fossil fuel economy that’s destroying us. The reality is, the UK public wants faster action on climate as the energy crisis hits. We know what is happening and what needs to be done – by acting in favour of corporate interest over the will of the people, the Government is showing contempt for the people who elected them. How long ago did our Prime Minister say Cop26 was our last chance to save humanity? And now they’re sidelining climate policy once again. This is not living in reality.”

Commenting on the protests a Government spokesperson said: “Any criminal activity will not be tolerated, and swift action is being taken by the police, preventing significant disruption to the public and industry. While we are working to drive down our use of expensive fossil fuels, there will continue to be ongoing demand for oil and gas over the coming decades while we transition to cheaper low-carbon energy. As the Business Secretary has said, turning off our domestic source of gas overnight would put energy security, British jobs and industries at risk, leaving us more dependent on foreign imports.”